Following the death of a bicyclist who was truck by a car in an intersection Oct. 17, police share this message: Pedestrians and cyclists don't always have the right of way in crosswalks.
Listen now to WTOP News WTOP.com | Alexa | Google Home | WTOP App | 103.5 FM
(1/4) 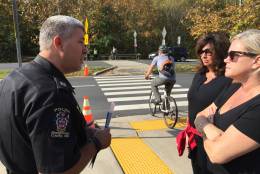 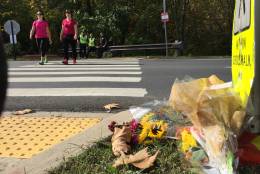 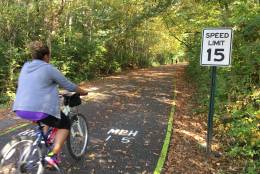 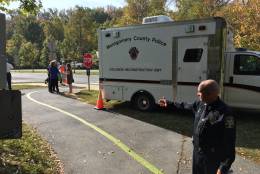 WASHINGTON — Pedestrians and cyclists don’t always have the right of way in crosswalks — that was the message from police Thursday along a popular trail in Bethesda, where a former University of Maryland professor was killed earlier in the week.

Ned Gaylin, 81, of Chevy Chase, was hit by a car Oct. 17 while riding his recumbent bike through the intersection of Capital Crescent Trail and Little Falls Parkway.

“The biggest thing that we hear is, ‘What can you do engineering-wise?’ But, we can’t control the human factor,” said Rick Pelicano, Maryland-National Capital Park Police acting captain. “Everyone has a personal responsibility for their safety in using crosswalks.”

Officers working an education campaign to increase public awareness on pedestrian and bicyclist safety explained that most people want to blame drivers and road engineering for regrettable crashes.

“The part nobody talks about is the pedestrians’ responsibility,” said Montgomery County police Capt. Tom Didone. “Every time a car and a pedestrian occupy the same space, the pedestrian loses every time — even if they’re right.”

On Thursday, officers handed out the information below, detailing Maryland transportation laws related to pedestrian and bicyclists.