Santos Escobar Villatoro, 16, was killed in a crash in Gaithersburg Thursday. Now his co-workers and other students remember the boy with a bright future.
Listen now to WTOP News WTOP.com | Alexa | Google Home | WTOP App | 103.5 FM
(1/4) 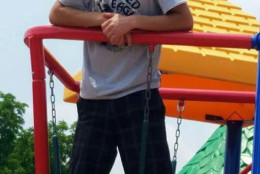 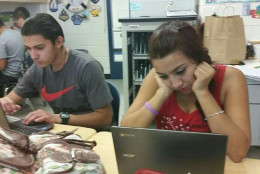 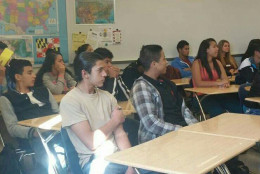 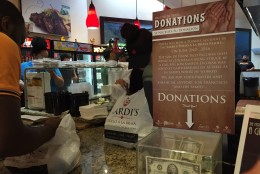 WASHINGTON — A week before the Gaithersburg High School senior class graduates, the school is mourning the loss of a freshman, killed while cycling not far from the school.

Montgomery County police are investigating the death of 16-year-old Santos Escobar Villatoro, a freshman at the school. According to what police know so far, it appears Villatoro was riding his bike on the sidewalk along Route 355/South Frederick Avenue near Fulks Corner Avenue at about 2:30 p.m. Thursday when he ran into a commercial sign that had been placed on the sidewalk. He fell into the path of traffic on Route 355.

Police say the driver of a Toyota Highlander was traveling southbound on Route 355 struck Villatoro. The driver, who remained at the site of the crash, was not injured and has not been charged at this time. Villatoro died at the scene.

Villatoro worked at Sardi’s Peruvian Chicken in Gaithersburg, where co-workers nicknamed him “Tony.” Angel Guzman, the district manager for the restaurant, said Villatoro was a standout as an employee. He was the type of staffer, Guzman says, who always went the extra mile “doing what it takes, helping anyone out who needed help, came to work early, if he needed to stay late to help out, he’d stay late.”

Guzman went to visit Villatoro’s father and met with students from the school as well.

“All they kept talking about was how great this kid was — how he used to motivate kids, and how everyone looked up to him,” he said.

“He told me that he looked up and asked God why he took the ‘good ones.’”

Guzman said he had no words for the young man.

“I mean, the kid was young, bright, with a future ahead of him,” Guzman said of Villatoro.

Guzman said Villatoro lived in the United States with his dad. His mother is still back in his native El Salvador, and the family is struggling to come up with funeral and burial costs. According to Guzman, “some of my staff members are giving up their tips and everything” to make it possible to help the family cover the expense of sending Villatoro’s body back to El Salvador for burial.

Donations can also be made on a GoFundMe campaign.

Guzman said he has a lot of workers under his supervision, but in the short time that Villatoro worked for him, the teenager made a big impact. And he says he’s not alone in noticing that Villatoro was special. Anyone who knew him, Guzman says, “will tell you the same thing; that Santos touched everyone he met in a positive way. In the little time he was on this earth, he made a lot of people smile and feel good about themselves. He will be truly missed.”

Police are asking anyone who may have witnessed the collision to contact the Collision Reconstruction Team at 240-773-6620.