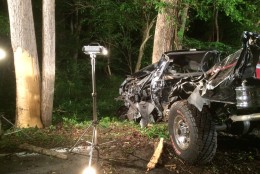 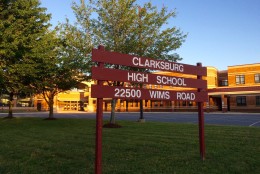 EMITTSBURG, Md. — Three well-liked juniors at Clarksburg High School died following a late-night crash along a winding Damascus road on the eve of the school’s graduation.

The deaths of 17-year-old Jacob T. Dennis, Patrick A. Shifflett, 18, and Cary Marui’ce Green, 17, cast a pall on the Wednesday morning ceremony at Mount St. Mary’s University, where the school’s principal spoke about the three boys.

“It’s devastating,” Stephen Whiting said with tears in his eyes.

Whiting knew the students well. He said they were a tight group of friends, but were also very accepting of others and well liked throughout the school.

Grief counselors will be at Clarksburg High Thursday to help students and staff.

The teens had been at a friend’s house before the crash, but investigators have found no evidence that alcohol was involved, police said.

Instead, speed and inexperience were believed to have played a role in the wreck, said Captain Tom Didone, with the Montgomery County Police Department.

The teens were traveling south when the 1989 Ford F-250 truck left the road and struck a tree in the 25300 block of Burnt Hill Road, according to Montgomery County police who responded to the scene shortly after 11:35 p.m. on Tuesday.

Dennis, of Boyds, and Shifflett, of Laytonsville, died at the scene. Greene, of Clarksburg, was taken to Suburban Hospital where he later died from his injuries.

Burnt Hill Road features two sets of curves in the area of the crash site. And  Dennis, who was driving, had a provisional driver’s license, Didone said.

Dennis received his license in March of 2016, Didone said.

At least two of the teens were wearing seat belts. The pickup truck had no air bags, police said.

WTOP’s Meg Schweitzer and Amanda Iacone contributed to this story.