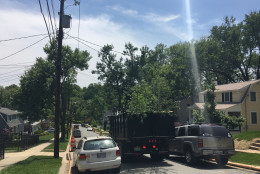 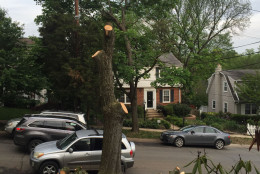 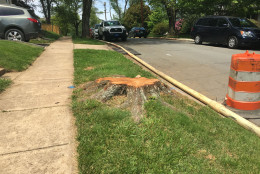 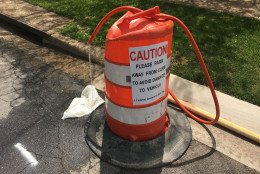 WASHINGTON — Earlier this month, Erin Besch arrived at her North Bethesda home to find that the limbs had been cut off the shade tree that had been outside her home for years.

The next day, the tree was reduced to a 5-inch stump.

“It was very shocking,” Besch said. “I had no idea this was happening.”

Now, Besch and others in the neighborhood are getting an apology from Washington Suburban Sanitary Commission. The area utility company says it failed to adequately warn residents about a plan to remove several mature trees along their street.

“A number of trees in that neighborhood were taken down before proper notification was given, and that’s absolutely something we apologize for,” said Jerry Irvine, a spokesman for WSSC.

The trees, which sit on public right of way, were cut down by contractors during a project to replace a water line from 1958. The tree at Besch’s Edward Avenue home was one of the casualties.

Besch said her 9-year-old daughter took it the worst when she discovered the tree was gone after stepping off the school bus.

“She’s still upset about it and still screams, ‘Why did they take the tree?’” Besch said.

Letters about the project were sent out and a community meeting was held, Irvine said, but the tree issue was not highlighted as much as it should have been.

“We all understand that there is a price for progress,” said Sharon Watts, who lives on Edward Avenue. “We just want a little notification of what’s going on before it happens, instead of coming home and being jolted by a tree being moved.”

Watts said the sprawling tree lines are one of the things that attracted her and her neighbors to the neighborhood.

“When you come home one day and all the trees on your block have been taken down, it’s violating,” Watts said.

Irvine said project managers are in the process of going door to door to make sure they reach out to people who live in the area about what is taking place in their neighborhood.

He said the utility company has permission from the state to remove trees on public rights of way and does not need resident approval to cut them down.

Irvine said 35 more trees will need to be taken down along streets in the North Bethesda Grove neighborhood, and dozens more will be pruned.