An owl rescue in Montgomery County

While walking her dogs, a Potomac woman saw something strange on the ground. It wasn’t a rock, it was a young great horned owl. And it needed help.
Listen now to WTOP News WTOP.com | Alexa | Google Home | WTOP App | 103.5 FM
(1/8) 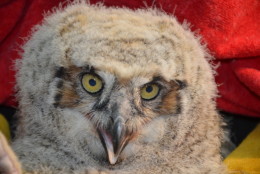 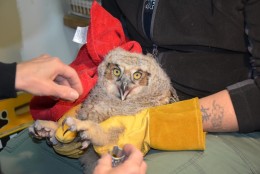 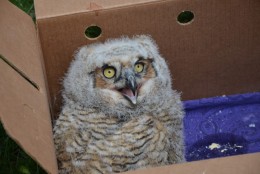 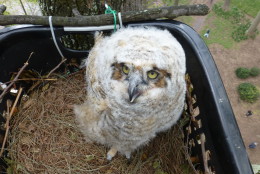 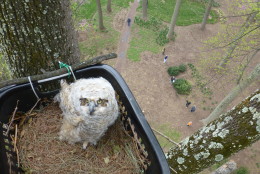 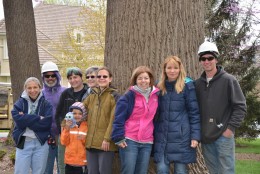 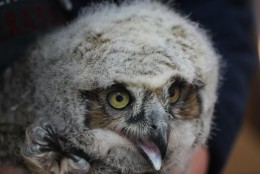 That’s the thought that went through Potomac resident Ann Fleming’s head when she spotted something on the ground near her home on Tuesday.

Fleming was out walking her dogs, and something about the thing on the ground made her take a closer look– that’s when she noticed that the thing she thought was a rock was staring back at her.

“I saw these two big eyes looking back at me!” she said. It wasn’t a rock, it was a young great horned  owl.

Fleming, an animal lover, worried that the owl might be injured, but didn’t want to just scoop it up. She’d heard about Second Chance Wildlife Rescue,  so she called them and was referred to Montgomery County Animal Services. She was told it could be a while before an officer could get to Potomac, so she and her brother took turns watching over the owl. “We did a little security watch, because we do have foxes in the neighborhood and I was so worried about this little baby owl,” Fleming said.

When Montgomery County Animal Services Officer Lavonia Byrd showed up, Fleming says Byrd sized up the situation. She determined the young owl was days away from being able to fly, and the exposure to foxes and other predators was too great a risk. So the little raptor was collected and another link in the local wildlife rescue network was contacted:  Suzanne Shoemaker at Owl Moon Raptor Center, a non-profit that rescues and rehabilitates birds of prey, was called in and took over.

The bird, a great horned owl, was looked after, checked for injuries and by Friday, plans for the bird’s return to its nesting site were finalized.

Early Friday morning, a team of volunteers gathered at the foot of the tree where the owl’s nest had been. A specially-assembled simulated nest was constructed using a laundry basket lined with organic materials. The “nest” was hoisted up and fastened to the tree with the help of Mike Fried, a Frederick county arborist who frequently volunteers with Shoemaker’s organization. He says he not only loves trees, but the birds who make their homes up in their branches.

Once the nest was secured, it was time to hoist the little bird to its perch.  Fleming said it was great to see the young owl—they don’t know whether it’s male or female—placed safely in the nest.  But Fleming says she won’t relax just yet—it turns out the rescued owl has a sibling, who was doing just fine, exploring branches on the tree.

Shoemaker says both owl parents were in the area, checking in on their babies, and that sometimes, separated siblings will find each other and end up in the new nest. Fleming says that’s her hope. In the meantime, she says “I’m going to be on Owl Baby Two watch. They’re just adorable.”  Shoemaker says she and her volunteers from Owl Moon Raptor Center will be monitoring the site with Fleming’s help—just in case.

Fleming has spent the better part of this past week making sure that the owl would be taken care of, despite having a busy schedule herself. She could have just left the owl, but says “I’m just not one of those people. I have to help out—I’m an animal lover.”  Fleming has three rescue dogs at home, but says her love of animals extends beyond her front door. “We live in a beautiful area—we have so much nature around us. I think it’s our responsibility to help out”  and referring to her wild neighbors, Fleming says, “It’s really their territory –we’ve moved into it.”

Editors’s note: If you find a wild animal in the city that needs help, animal care programs like City Wildlife are here to help. Even though your intentions are good, caring for an orphaned or injured animal can sometimes hurt them instead.