GERMANTOWN, Md. — On Sunday, a group representing LGBT Catholics protested the firing of a music minister at Mother Seton Catholic Church in Germantown. They claim the dismissal was discriminatory because he is gay and married to a man.

As the morning mass proceeded inside the church, a handful of protesters were outside in a show of support for Jeffery Higgins, a cantor who worked at the parish. A cantor leads public worship within a liturgy through music.

Higgins says he was terminated on Nov. 8, 2015 for a simple reason: “Because I’m gay and married to my husband, Robert [Higgins].”

“They seem to have picked people who are gay and who get married as the dividing line. It’s unfortunate,” says Allen Rose, a board member Dignity USA, speaking broadly about the Catholic Church. Rose is a member of Dignity Washington.

Higgins’ husband also attended the rally. “I think it’s a travesty that the Catholic Church isn’t accepting of all their members,” Robert Higgins says.

In a statement, the Archdiocese of Washington says Higgins wasn’t terminated because of his sexual preference but because he was a minister in the church and that he was in public violation of Catholic teaching, which defines marriage as between a man and a woman.

Cardinal Donald Wuerl, Archbishop of Washington, also addressed the issue on his blog.

“The employment of a person in public ministry at a local parish was no longer possible when he indicated that he would to continue to openly live in contraction to what the Church proclaims as true,” Wuerl writes.

Other parishioners in the church say they were split on the issue or say they don’t know enough about this issue to comment.

Jeffery Higgins says there was one thing he hoped came out of Sunday’s protest.

“That the story is told,” Higgins says. “I hope people hear what happened to me and understand that this happens too often, and that it will start a process of bringing about a more accepting church.” 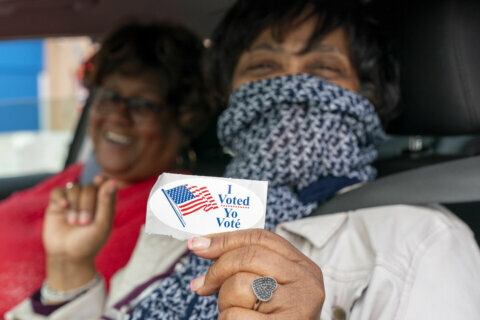 Driving the vote in Montgomery County with free transportation