Holidays: 'Enchant' shines with millions of lights in Nats Park | Where to see holiday lights | Send in photos of decorations | How to give greener this season
Home » Montgomery County, MD News » Police use homeless man… 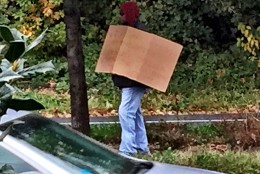 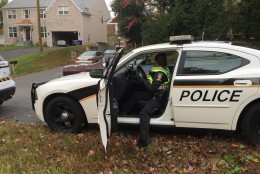 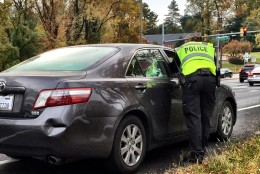 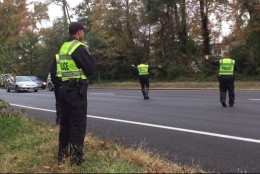 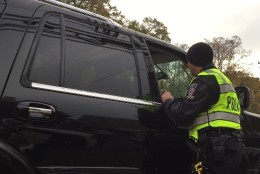 His sign reads “I am not homeless. I am a Montgomery County police officer looking for cell phone texting violations.”

The undercover officer, equipped with a police radio and wearing a body camera, tipped off other officers to the offending car’s description, when he witnessed someone illegally using a smartphone behind the wheel.

Chapin and approximately eight officers conducted a distracted driving enforcement detail early Tuesday, writing dozens of tickets to drivers who felt compelled to divide their attention between driving and using their phone.

“If you’re using your thumbs, texting, while driving down the road it’s totally distracting, because you have to look down to see what you’re typing,” says Chapin.

Other officers on the detail say texting while driving is more difficult to prove in court, so they often cite violators for not using hands-free devices.

“When you have your phone to your ear you’re distracted because you only have one hand on the wheel, and it’s hard to react,” says Chapin.

Once they are waved over, Chapin says few drivers dispute they were using their phones behind the wheel.

“Not too many deny it — they know they’re doing it. And some people say ‘thank you,'” he says.

During the two-hour enforcement, police issued a total of 56 traffic citations and 22 warnings for the following violations: