WASHINGTON — Beginning in June in Montgomery County, it will be against the law to smoke electronic cigarettes in the same…

WASHINGTON — Beginning in June in Montgomery County, it will be against the law to smoke electronic cigarettes in the same public places where tobacco cigarettes are banned.

On Tuesday, the Montgomery County Council is expected to introduce a bill taxing e-cigarettes and other vaping or e-cigarette products.

George Leventhal, council president and chairman of the Health and Human Services Committee, says he sees the tax as a way to help with the county’s budget problems.

“It’s striking that today, e-cigarettes are not subject to tax. And I think this is good revenue for Montgomery County,” Leventhal says.

Leventhal is one of the bill’s sponsors. “I think we can raise revenue that will assist us with our budget challenge this year.”

Since there are no federal regulations on electronic cigarettes, Montgomery County is one of a growing number of jurisdictions enacting their own laws. And with the possible dangers from vaping still unknown, it’s also seen as a way to help protect teenagers — especially since the vaping industry targets teens.

Leventhal adds that he applauds councilmember Tom Hucker, who will introduce the legislation.

Maryland, Minnesota and North Carolina are the three states that currently tax e-cigarettes. Several other states are considering the move: Washington, New Jersey and D.C. The District had previously exempted e-cigarettes from the city’s tobacco tax. 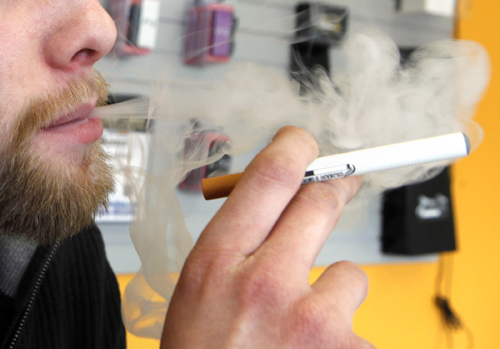 For smokers, can e-cigarettes save money?