BOSTON (AP) — It’s a rare thing for a Red Sox fan to cheer for a member of the New York Yankees.

Judge hit his major league-leading 56th and 57th home runs, Gleyber Torres had a go-ahead three-run double in the 10th inning and the Yankees held on to beat the Red Sox 7-6 on Tuesday night.

Playing in New York’s 142nd game, the Yankees slugger’s second drive of the night brought fans from both sides of the rivalry to their feet in applause as he moved four from tying the American League home run record Roger Maris set with the Yankees in 1961.

“(Red Sox fans) were wearing me out on deck, I don’t know if they were cheering or not,” Judge said. “They were wearing me out. But nah, it’s all of baseball fans. Just fans all over. Red Sox, Yankees — it doesn’t matter. They came here to see a good game and to see a show. Both teams I think put on a good show for them.”

After going homerless in five games, Judge had a pair of of tying solo homers, off Nick Pivetta in the sixth and Garrett Whitlock in the eighth.

“I’m out of adjectives,” Yankees manager Aaron Boone said. “Just really impressive what he did.”

Philadelphia’s Kyle Schwarber is second in the major leagues with 37 homers, making this the first time a player finished a day with a 20-homer lead since the final day of the 1928 season, when Babe Ruth was 23 ahead of Jim Bottomley and Hack Wilson, according to the Elias Sports Bureau.

New York, which came from behind three times, reopened a six-game AL East lead, its largest since Sept. 1.

Torres broke a 4-4 tie in the 10th against Jeurys Familia (2-3). He has eight RBIs in his last three games after getting just three in his previous 14.

“I was telling myself: ‘Just be simple. Hit the ball the other way because I know second base is in the shift,'” Torres said. “Don’t try to do too much, just put the ball in play.”

Clay Holmes (6-3) hit Reese McGuire with a pitch and got one out in the 10th, and Alex Verdugo had an RBI single that put runners at the corners.

Xander Bogaerts popped out to shallow left, and Peralta bounced a fastball for a run-scoring wild pitch. Wandy Peralta struck out Devers on the seventh pitch of the at-bat, his first slider of the night, for his fourth save.

“It’s been like that the whole season, you know? The guys are putting in effort, putting good at-bats but we haven’t been able to put them away,” Red Sox manager Alex Cora said.

Rookie Triston Casas, McGuire and Bogaerts homered for Boston, which has lost eight of 14 to the Yankees this season.

Marwin Gonzalez hit the first of three tying homers for New York, a two-run drive in the third.

Cole called what everyone is getting to witness with Judge “special.”

“I feel very fortunate to be able to play on the same team with him,” Cole said. “It’s one of the most historic offensive seasons of all-time. … I’m humbled to be a part of it.”

Aaron Hicks pinch hit for Jose Trevino to open the 10th and drew a walk in Hicks’ first appearance since he was pulled midgame of the the Yankees loss Friday to Tampa Bay.

Yankees: Anthony Rizzo (headaches from epidural injection) took some swings during batting practice and could return for New York’s next series at Milwaukee, or at home next week when the Yankees host Pittsburgh. … LHP Aroldis Chapman (infected wound) pitched an inning in a rehab appearance for Double-A Somerset, giving up a hit, with two strikeouts and a walk. CF Harrison Bader (planter fasciitis in right foot) went hitless in three at bats and struck out twice.

Red Sox: RHP Nathan Eovaldi (right shoulder inflammation) threw batting practice. He has been on the injured list since Aug. 19.

Yankees IF/OF Tyler Wade was at Fenway on Tuesday as part of the taxi squad. . … OF Jasson Dominguez was promoted to Double-A Somerset and went 0 for 5. He hit .306 with six homers, 22 RBIs and 17 steals in 40 games at High-A Hudson Valley. The 19-year-old started the season at Class A Tampa. 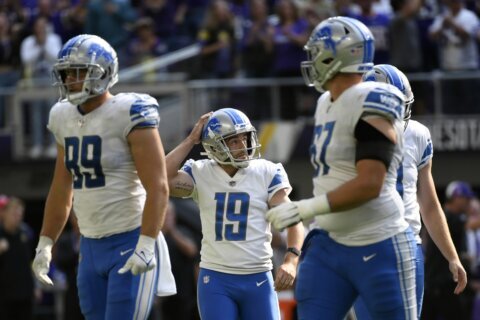 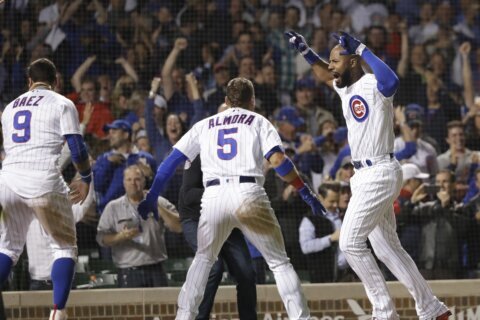