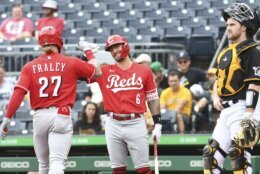 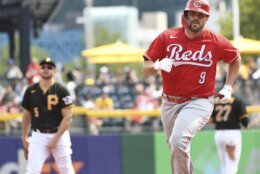 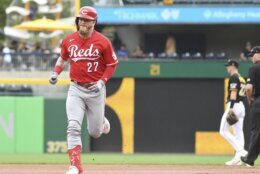 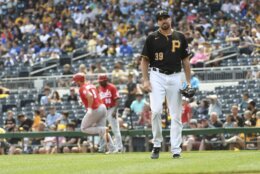 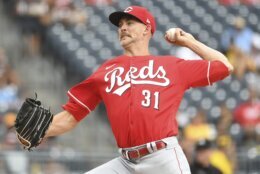 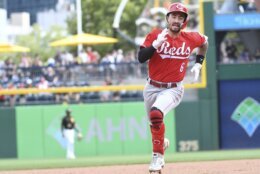 PITTSBURGH (AP) — Jake Fraley had three RBIs and scored four times to power the Cincinnati Reds to a 9-5 win over the Pittsburgh Pirates on Sunday.

Fraley, cousin to WTOP’s Jason Fraley, led off Sunday by grooving an 0-2 curveball from Zach Thompson (3-10) 341 feet to right for his seventh homer and fourth in six games. He walked in three of his next four at bats, and also drove in two runs with a single off the right-field wall in the sixth.

Cincinnati took two of three from Pittsburgh, which has dropped eight of 10.

Minor gave up two in the first, but was handed back a 3-2 lead when Mike Moustakas hit a two-run home run in the third that went 416 feet and landed in the final row above the wall in right.

Fraley scored the third of four runs off Manny Bañuelos in the sixth, stealing second after his two-run single before going home on a triple from Jonathan India. Donovan Solano capped the outburst with an RBI single, making it 7-2.

Thompson was replaced by Bañuelos after using 78 pitches to get through five innings, allowing three runs on eight hits with five strikeouts and three walks.

Minor’s outing ended on a two-out, two-run double from Tucupita Marcano in the sixth. Jason Delay drove in Marcano with a single off Ian Gibaut, cutting the deficit to two.

Fraley scored for a fourth time on a single from Solano in the eighth. An RBI single from Nick Senzel then pushed the lead to four.

Reds: RHP Hunter Greene threw a bullpen Sunday. The rookie, who has been out with a strained right shoulder since Aug. 1, is expected to throw another bullpen in Philadelphia on Wednesday.

Pirates: 3B Ke’Bryan Hayes (back spasms) could return Tuesday after having a full workout Saturday.

Reds: RHP Luis Cessa (3-1, 5.50 ERA) will go Monday in the first of a four-game set at Philadelphia. He has made 34 straight relief appearances since his last start, which came April 14 against the Los Angeles Dodgers. Noah Syndergaard (7-8, 3.95) gets the ball for the Phillies.

Amid the losses, Pirates believe end of overhaul is in sight

Today in Sports History-Week Ahead, Oct. 7-13