NEW YORK (AP) — Raise your hand if you saw that coming from the Cincinnati Reds.

Joey Votto lined a tiebreaking double in a three-run 10th inning for his second go-ahead hit of the night, and Cincinnati beat the New York Yankees 7-6 on Thursday to earn an unexpected series win.

Last in the NL Central, the Reds got an outstanding outing from Luis Castillo and took two of three at Yankee Stadium from the top team in the majors. They blew a sizable lead for the second consecutive night, but this time recovered and held on to win for the sixth time in seven games overall.

Boosted by a ninth-inning comeback in the opener Tuesday night, it’s the first time they’ve won back-to-back series all season.

“This whole series felt like a playoff series,” Cincinnati manager David Bell said. “It’s a great experience for our team and that’s how you get better.”

The last time it happened was 2001, when the struggling Kansas City Royals upended Seattle. Before that, it hadn’t happened in 46 years.

New York has lost only four series all season and has won 20 of its last 24 home games.

“It’s pretty special,” Reds shortstop Kyle Farmer said. “No one can take that away from us and it’s pretty cool.”

Aaron Judge hit his major league-leading 31st home run to start a Yankees comeback in the eighth — one inning after he made a diving catch in center field.

Gleyber Torres tied it 4-all with a two-run homer off Jeff Hoffman, costing Castillo a win. Matched up in a crisp duel with fellow All-Star Nestor Cortes, the right-hander pitched seven splendid innings of two-hit ball.

“He’s one of the best pitchers in the league,” Judge said. “He just didn’t leave too many mistakes for us to hit. When you have 100 (mph) and you’re painting the corners, that’s in for a tough day.”

Tyler Stephenson followed Votto’s double off Lucas Luetge (2-3) with an RBI double of his own, and Donovan Solano added a run-scoring single with two outs to make it 7-4.

Matt Carpenter led off the bottom of the 10th with a two-run homer against winner Reiver Sanmartin (3-4), who got two outs in the ninth.

New York tried to finish off yet another rally but Dauri Moreta got two outs for his first major league save, retiring DJ LeMahieu on well-struck drive to center field with two on to end it.

Moreta said he got the game ball and will give it to his mother.

Votto gave the Reds a 2-1 lead in the eighth with an RBI single off reliever Jonathan Loáisiga, just activated from the injured list. Farmer added a two-run single to make it 4-1.

“Things didn’t work out the way I wanted,” Loáisiga said through a translator.

Cincinnati figures to be a seller ahead of the Aug. 2 deadline, and Castillo is a prime target for teams in need of starting pitching.

“I’ve heard the rumors about being traded to the Yankees and stuff like that,” he said through a translator.

Votto said opposing hitters keep telling him how good Castillo’s stuff is when they get to first base.

“He was excellent. He seems to be getting hotter, so it’s been really fun to watch,” Votto said. “It’s the best I’ve seen him.”

Anthony Rizzo doubled with one out in the sixth for New York’s first hit. Judge, who had walked, went to third on the play and scored on Giancarlo Stanton’s RBI groundout.

Cortes also went seven innings, allowing four hits and a walk with four strikeouts. The only run he gave up came on Brandon Drury’s shallow sacrifice fly to right that caught Carpenter, an inexperienced outfielder, off guard.

Carpenter made the catch with the bases loaded but didn’t look home right away, allowing Nick Senzel to score easily from third.

Reds: Senzel returned to the starting lineup in center field. He was a late scratch Wednesday with back stiffness and was caught stealing as a pinch runner in the eighth. … INF/DH Mike Moustakas was placed on the injured list without an injury designation, an indication the move was likely related to COVID-19 protocols. Cincinnati recalled INF/OF Max Schrock from Triple-A Louisville. … RHP Luis Cessa (left intercostalis) planned to play catch. … RHP Vladimir Gutiérrez is scheduled for Tommy John surgery next Wednesday.

Yankees: RHP Luis Severino went on the 15-day injured list, one day after leaving his start with right shoulder tightness. Severino had an MRI that showed a low-grade strain to his right latissimus dorsi muscle. … Loáisiga had been sidelined since May 23 with shoulder inflammation. … OF Aaron Hicks (bruised right shin) sat out for the second consecutive game. … RHP Domingo Germán, sidelined all season due to right shoulder impingement, is set to make another rehab start Friday for Triple-A Scranton/Wilkes-Barre.

Yankees: LHP Jordan Montgomery (3-2, 3.19 ERA) faces visiting Boston in the opener of a three-game series Friday night. The longtime rivals split a four-game set last weekend at Fenway Park. RHP Nathan Eovaldi (4-2, 3.16) is expected to return from injury to start for the struggling Red Sox against his former team. Eovaldi has been sidelined since June 9 with lower back inflammation. 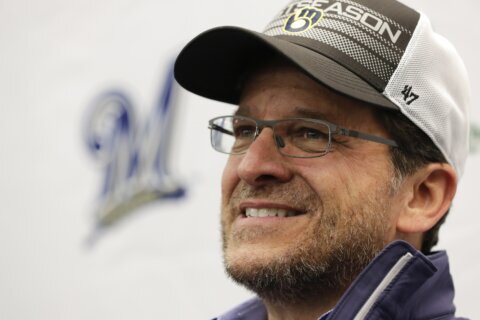