CLEVELAND (AP) — The finale of the four-game series between the Detroit Tigers and Cleveland Guardians on Sunday has been…
Listen now to WTOP News WTOP.com | Alexa | Google Home | WTOP App | 103.5 FM

CLEVELAND (AP) — The finale of the four-game series between the Detroit Tigers and Cleveland Guardians on Sunday has been postponed by rain.

The Guardians have had nine home games postponed by inclement weather and have played seven doubleheaders at Progressive Field.

The scheduled 1:40 p.m. game was called off about two hours before the first pitch. The game will be made up as part of a traditional doubleheader Aug. 15.

The Tigers optioned rookie first baseman Spencer Torkelson, who batted .197 in 83 games, to Triple-A Toledo after the postponement was announced.

“We have a plan in place to get him some at-bats and get him back to being the offensive force that we know he’s going to be,” manager A.J. Hinch said. “It’s much less spotlight to do it at Triple-A than it is to continue to this in the big leagues.”

Torkelson, 22, was the first overall pick in the 2020 draft and made the team in spring training. He hit five homers with 21 RBIs in 264 at-bats.

Hinch wants Torkelson to continue to get every day at-bats and said there’s no timetable for how long he’ll be in Toledo.

“He handled it like he’s handled everything so far, with confidence, understanding and appreciation for the direct communication,” Hinch said.

Cleveland won the first three games of the series, including a 10-0 rout Saturday in which All-Star third baseman José Ramírez homered in his first two at-bats.

Ramírez, who will participate in Monday’s Home Run Derby, homered in the first and second innings. He drove in five runs and leads the AL with 75 RBIs entering Sunday.

Ramírez will be joined by teammates Andrés Giménez, who will start at second base for the AL, and closer Emmanuel Clase for Tuesday night’s All-Star Game.

Cleveland trails first-place Minnesota by 2½ games in the AL Central. The Guardians open an 11-game road trip Friday night in Chicago against the White Sox with Cal Quantrill pitching. The teams play a doubleheader Saturday.

The Guardians will likely add a starting pitcher from Triple-A Columbus to replace Aaron Civale, who is out indefinitely with a sprained right wrist.

Detroit has lost eight of nine and is a season-worst 18 games under .500. The Tigers play a doubleheader in Oakland on Thursday and return home to begin a series against the Twins on Saturday.

Miguel Cabrera, who was chosen as a legacy selection, and closer Gregory Soto, will represent the Tigers at the All-Star Game. 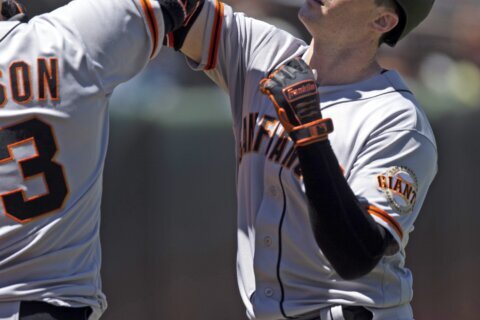