Chisox Tim Anderson suspended by MLB for contact with umpire

Anderson was in the White Sox’s lineup hitting leadoff Saturday against Oakland after he appealed the suspension, and he’ll remain active until his appeal is heard. It’s the third time he’s been disciplined by MLB in the past year, including a one-game ban overturned on appeal earlier this season.

Anderson and manager Tony La Russa were ejected Friday in a 7-3 loss to the Athletics after a heated exchange over a called strike from reliever Domingo Acevedo that appeared to be high. The tip of Anderson’s helmet appeared to make contact with Mahrley.

Anderson had two singles on Saturday and was at the plate in the ninth when Gavin Sheets scored from third on Zach Jackson’s wild pitch to give Chicago a 3-2 win. Following the game, Anderson declined to speak to reporters about the suspension.

Before the contest La Russa said he watched video from the incident and said, “I think there’s an argument to be made in Tim’s favor, so we’ll see.

“Did you see how the interaction happened?” La Russa added. “The way we see it, there’s an argument to be made that the umpire didn’t move back, he was moving forward as well.”

Anderson missed the first two games of 2022 as punishment for making contact with an umpire during a bench-clearing incident last September. He was also suspended a game in April after directing an obscene gesture toward fans, but that ban was overturned on appeal. 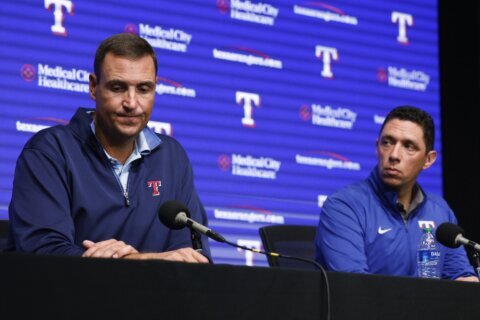