The AL Central-leading Twins start a home series against the AL East-leading Yankees with their rotation in a tough situation.

Right-hander Bailey Ober (1-2, 4.01 ERA) went on the 15-day injured list with a strained right groin Monday, becoming the fifth sidelined pitcher among the eight who have started three or more games for the Twins this season.

Minnesota hadn’t announced a starter for Tuesday as of Monday night. Yankees right-hander Jameson Taillon (6-1, 2.30) starts for the first time since taking a perfect game into the eighth inning against the Angels last week.

Mike Trout and the reeling Los Angeles Angels host Boston again looking to stop a 12-game losing streak that matches the team’s longest in a single season — last done to end the 1988 schedule.

The three-time MVP singled in the first inning Monday night to end an 0-for-26 drought, the worst hitless run of his career, but the Los Angeles offense mustered little else in the opener of a seven-game homestand. Michael Wacha pitched a three-hitter for his first shutout in five years as the Red Sox won 1-0 for their fifth consecutive victory.

“It’ll be good to see some old people and catch up,” said Olson, acquired from the Athletics in a March trade to replace Freddie Freeman in Atlanta.

It might do the A’s some good to hit the road. They lost the last six games of a 1-9 homestand that ended Sunday, dropping to 7-23 at the Coliseum — the worst home record in the majors and the second-worst in franchise history through 30 games. The 1920 Philadelphia A’s started 6-23-1 at home.

Houston ace Justin Verlander tries to get back in the win column when he starts against the visiting Mariners, one night after the teams got into a bench-clearing scuffle that ended in multiple ejections.

The 39-year-old right-hander, in his return from Tommy John surgery, began the season 6-1 with a 1.22 ERA, then allowed six runs and 10 hits over six innings in a May 21 loss to Texas and three runs while pitching two-hit ball over seven innings in a June 1 no-decision at Oakland. Those two starts raised his ERA to 2.23. Right-hander Chris Flexen (2-6, 4.55) starts for Seattle.

The Guardians are set for yet another doubleheader after their series opener Monday against Texas was postponed by rain — their seventh home rainout this season. The teams were rescheduled for a traditional twinbill Tuesday, with the first game starting at 3:10 p.m.

Jon Gray (1-2) will start the opener for the Rangers against Cleveland’s Cal Quantrill (2-3). Texas left-hander Taylor Hearn (3-4) is scheduled to start Game 2, but the Guardians had not yet announced their pitcher. Rookie Konnor Pilkington was originally slated to start Tuesday’s matchup.

Due to the bad weather, the Guardians have played just 19 games at Progressive Field, the fewest home games among major league teams.

Toronto’s Alek Manoah takes a 6-1 record and 1.98 ERA into his start at Kansas City. The 24-year-old right-hander, making his 31st big league start, is in search of his first major league complete game. He pitched eight innings in a win against Tampa Bay last Sept. 13 and against Cincinnati on May 21, failing during an animated dugout conversation with manager Charlie Montoyo to be allowed to take the mound in the ninth against the Reds. 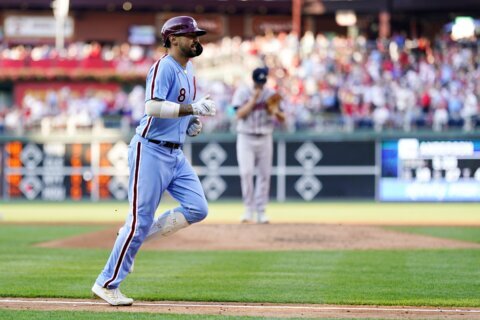 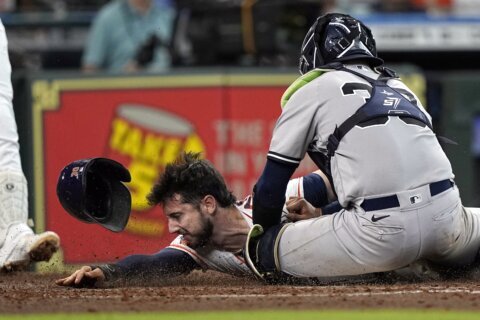