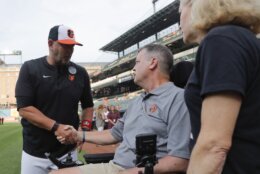 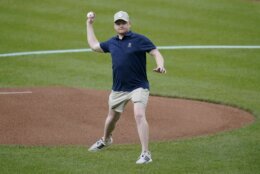 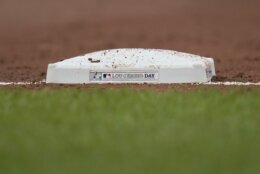 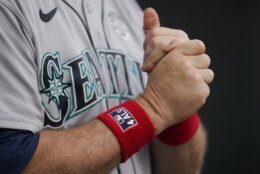 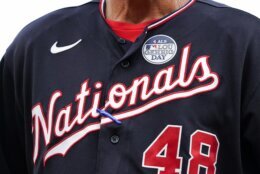 BALTIMORE (AP) — Jim Poole describes the past year almost matter-of-factly, even though the effects of ALS on the former reliever are anything but.

“I’m going to say a downhill spiral, but not in the negative sense. I’m not sad, or ‘woe is me.’ It’s just the way it is,” the 56-year-old said. “When I was diagnosed, I could still walk, my left arm still worked, I could speak well. In a matter of 11 months, (I’m) in a wheelchair and I adapt. That’s the main word that it’s been about, adapting and appreciating whatever I can accomplish in a given day.”

Poole was at Camden Yards on Thursday night for Lou Gehrig Day, when baseball celebrates the life and legacy of the Yankees’ Hall of Famer, who died on June 2, 1941, of Amyotrophic Lateral Sclerosis.

Around the league, players and umpires wore red 4-ALS bands. New York slugger Aaron Judge had Gehrig’s No. 4 on his cleats, and the Yankees hosted several individuals living with ALS, along with family and friends of ALS Ice Bucket Challenge co-founder Pat Quinn.

New York had Maria Cooper Janis, daughter of actor Gary Cooper, throw out the first pitch. Cooper portrayed Gehrig in “Pride of the Yankees.” A video recounting the disease’s impact was shown on the videoboard in center field, and Angels star Mike Trout stood along the third-base line to watch a snippet of Gehrig’s “Luckiest Man” speech.

“Obviously Lou Gehrig is one of the greatest players of all time, but obviously synonymous with this disease,” Yankees manager Aaron Boone said. “So the fact that our sport has taken this on, and hopefully become a face of it and hopefully just raising awareness to it, that we can make some progress.”

In Toronto, where the Blue Jays faced the Chicago White Sox, the CN Tower was lit up in purple to mark the day. The Tampa Bay Rays, who played at Texas, remembered Paul Kirsch, their former senior scouting supervisor. He was diagnosed with ALS in 2018 and died at age 65 in September from complications following a COVID-19 infection.

“I just still think people don’t quite understand a lot of the details of the disease, how horrible it can be and how it affects families. It’s essentially a death sentence when people get diagnosed with it,” Hilliard said. “It’s an underfunded disease, and we’re trying to gain traction to get that funding to get on the right path, the right track to find a cure.”

Hillard didn’t play Thursday because he was in concussion protocol. His mother Tamara spoke on the field before the game. She was on the committee that spent about two years trying to get MLB to have a Lou Gehrig Day.

“We were really just looking to get players and staff and coaches and managers to just say this little pitch that was, ‘I’m all in for Lou Gehrig.’ And we put together this video,” she said. “A bunch of the players that said, ‘Yes, I’m in’ — and it kind of grew. And I’m really proud to say that the Rockies because of Sam and our connection to this family-loving team were the first team to say, ‘We’re on board.’”

Poole was diagnosed about a year ago, shortly after the first annual Lou Gehrig Day in baseball.

“I wasn’t diagnosed until two weeks later, but by that point I was pretty sure where we were heading,” Poole said. “It almost seemed coincidental last year. … Now it’s ingrained in my life, my family’s life. I was glad when MLB did it last year. Obviously I have even more appreciation that MLB and the clubs stepped up and tried to figure out a way to get enough people on board, and maybe something good comes out of it sooner rather than later.”

Poole pitched for eight major league teams from 1990-2000, including the Orioles from 1991-94. The left-hander’s old ballpark looks a bit different than the one he pitched in; the left-field wall has been pushed back and made taller this year.

“I don’t know if it would’ve contained some of the homers I gave up,” Poole joked. “But (Mike) Mussina might have won a few more games.”