ANAHEIM, Calif. (AP) — A locked-in Mike Trout and effective starting pitching is a difficult duo for any opponent to overcome when facing the Los Angeles Angels.

Both are also huge reasons why the Halos have won three straight and are off to their best start since 2017.

Trout drove a slider from Triston McKenzie (0-2) into the bullpens in left field for a two-run shot in the third inning to give the Angels a 3-0 lead. He was inches from a second home run in the fifth, but the ball hit the wall in the left-field corner for an RBI double to score Shohei Ohtani.

Trout is 14 for 34 (.412) during a nine-game hitting streak. The three-time AL MVP missed most of last season due to a calf injury — which coincidentally occurred against Cleveland — but wasn’t lacking in confidence that he could return at a high level.

“I’m just very confident. That’s up to you guys if I am at peak level, but I feel good up there and obviously healthy,” said Trout, who is batting .347 through the first three weeks of the season with five home runs and eight RBIs.

Sandoval — who struck out nine — has not allowed an earned run in three starts this season. The left-hander retired his first six batters before Ernie Clement walked leading off the third and Myles Straw singled with two outs. Sandoval (1-0) then set down 12 straight before Owen Miller lined a single to center with two outs in the seventh.

What pleased Sandoval the most, though, was that he issued only one free pass after walking five in his first two starts. He also threw 59 of his 90 pitches for strikes, after entering the game with a 57.7% strike rate.

“It was definitely better than the last two starts. There’s still room to improve for sure, but it’s a good step in the right direction,” said Sandoval, who went at least seven innings for the fourth time in 32 career starts. “Limiting walks is definitely the biggest thing for me because I want to go deeper into games.”

The Guardians have dropped all five games on their road trip but averted a second consecutive shutout in Anaheim when Straw began the ninth inning with a base hit and scored on José Ramírez’s one-out double off Jimmy Herget.

Raisel Iglesias came in after Ramírez’s extra-base hit and struck out Franmil Reyes and Miller for his fourth save.

McKenzie allowed four runs and seven hits in 5 2/3 innings. He struck out six. The right-hander retired the first four Angels batters before Anthony Rendon hit a one-out double in the second and scored on Brandon Marsh’s base hit up the middle.

“He threw a ton of strikes,” Guardians manager Terry Francona said of McKenzie. “He started the game off 18 of 19 (pitches for strikes). That’s maybe too many to start if you want to be too picky. When he made a mistake it was right over the middle of the plate and it ended up hurting him.”

Besides hitting two doubles, Rendon made a nice defensive play in the fifth inning. The third baseman made a diving stop on a sharp grounder hit by Clement and made the throw in time to get him at first.

Cleveland had a pair of great defensive plays. Right fielder Oscar Mercado made a diving play on a sinking line drive by Andrew Velazquez in the seventh inning, and shortstop Amed Rosario made a nice throw from shallow center that Austin Hedges fielded to get Trout out at home. Rosario took the relay throw after Straw chased down Jared Walsh’s double at the center-field wall.

Guardians OF Steven Kwan was out of the lineup for the second straight game due to right hamstring tightness.

Angels: Ohtani (1-2, 4.40 ERA) carried a perfect game through 5 1/3 innings in his last start at Houston before giving up a single to Jason Castro. He also matched a career high with 12 strikeouts. Ohtani’s only previous start against Cleveland was last season, when he allowed two runs on five hits in 4 2/3 innings for a no-decision. 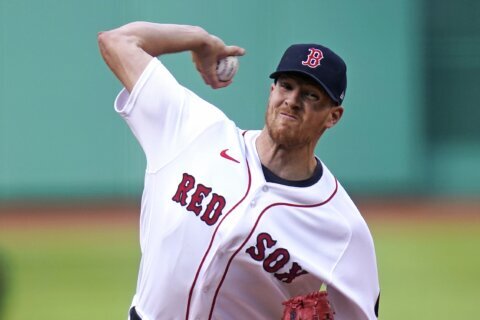 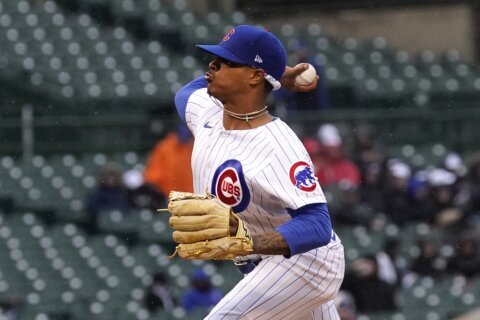 LEADING OFF: Cubs’ Stroman coming off COVID list vs Dbacks 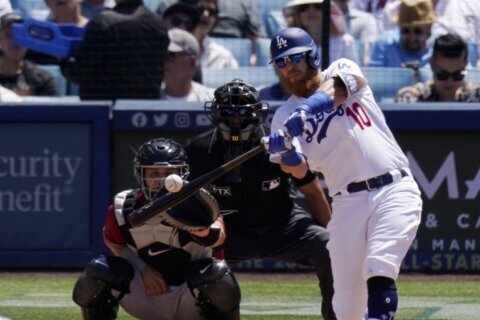