“It’s pretty cool,” Manoah said of Toronto’s record in his outings. “I want those guys to know that I’m giving it my all every time. I think they kind of play off that energy.”

Manoah’s strong outing was a blessing for a Blue Jays rotation that took a hit when left-hander Hyun Jin Ryu was placed on the 10-day injured list before the game because of a sore forearm.

“It’s never good when anybody goes on the IL, but it’s a part of the game,” Manoah said.

The right-handed Manoah, who pitched six shutout innings against the Yankees last week, saw a 15-inning scoreless streak dating to last season get snapped when Oakland’s Stephen Vogt hit a solo home run in the fifth. The homer was Vogt’s first.

Manoah retired 10 of the final batters he faced, using a double-play grounder to erase Chad Pinder’s single in the fifth.

“He doesn’t back down from anybody,” Blue Jays manager Charlie Montoyo said of Manoah. “When he gets in trouble, he goes from 92 to 94.”

Oakland went 5-5 on a season-opening 10-game road trip to Philadelphia, Tampa Bay and Toronto. The Athletics play 13 of their next 15 at home.

“I couldn’t be happier with the club’s energy, effort level and fight through these 10 days,” manager Mark Kotsay said. “The record may not reflect, right now, how well I feel we played on this road trip.”

Gurriel went 2 for 3 with an RBI. He had a sacrifice fly in the first, doubled and scored in the third, then singled and scored from first base in the fifth on a two-base throwing error by Athletics shortstop Kevin Smith.

“I thought the fastball command was better tonight, I just didn’t have the breaking ball command,” Oller said. “It’s unfortunate against a good hitting team.”

Athletics: Brown stayed in the game after making a diving play in right field in the second.

Athletics RHP Frankie Montas did not accompany the team to Toronto because of a visa issue. Instead, Kotsay said Montas returned to Oakland to prepare for his start in Monday’s home opener.

Athletics: Montas (1-1, 4.76) starts Monday as Oakland opens its home schedule with four against Baltmore. Baltimore has not named a starter. 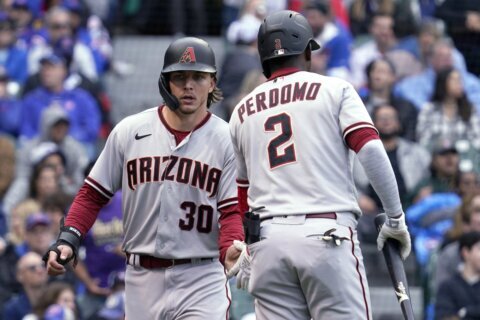 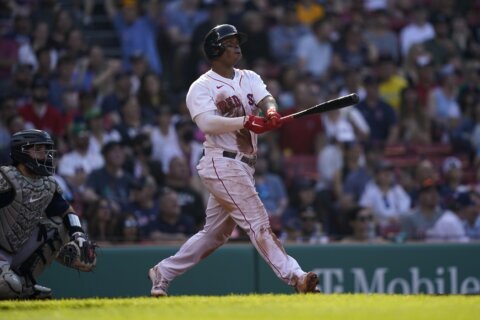