ENGLEWOOD, Colo. (AP) — It wasn’t just the rap and rock pulsating through the giant speakers at the first minicamp practice of 2022 that exposed a new energy at the Denver Broncos training center.

The ones who really delivered the juice to go with the jams were new ball-of-fire head coach Nathaniel Hackett and the magnetic Russell Wilson, Denver’s newly acquired quarterback.

Talk about a combustible combination.

Both of them credited the other with bringing the electricity Monday.

Hackett was all over the field, working with his offense, defense and special teams. He even lined up in the backfield for fake handoffs as Wilson worked on some play-action throws.

“He’s an amazing teacher and I think that’s what you love about him,” Wilson said after the pair’s first practice together. “I think everybody’s learning in such a rapid pace, at an exponential rate. And so that’s been really amazing. He just brings great energy. I think that he’s young, he’s vibrant, he brings that intelligence to the game.”

They even work well together on the football field itself.

“Our relationship is really tight, obviously, to give him a little handoffs here and there, you know, somebody said they call him ‘White Lightning,'” Wilson said with a chuckle.

“Well, I always wanted to play running back when I was younger,” cracked Hackett. “I want to play all the positions. But no, you want to make everything game-like as much as possible and especially in the play-pass world, you want that quarterback always to feel somebody back there.”

The 42-year-old rookie head coach deemed his first practice a success, finding no lack of enthusiasm.

“Everybody’s coming in, they’re so fired up,” Hackett said. “They’re so excited to get out there. I mean, in the end, that’s what you want. You want guys to come out here, you want them to want to practice and want to get better.

“And Russ leads that charge,” Hackett said. “I mean, this guy loves practice. Just out there at the end, he’s like, ‘Wait, we’re done? Can we do more?’ And you’re like, ‘Man, I would love to, but we got to tone it down. Baby steps.'”

Gone are Vic Fangio, who famously quieted the jams at practice, and Teddy Bridgewater, the 10th quarterback who tried and failed to lead the Broncos to the playoffs following Peyton Manning’s retirement.

“I like the music,” said Hackett, a former hip-hop dance instructor. “If I don’t have it, I start freaking out. I feel like on game day it’s pretty loud and there’s a lot of things going on. So, I think distractions to a certain extent, are good.

Enthusiasm, charisma and even the loud music at practice are welcome changes for a franchise that has schlepped through three head coaches, 10 starting quarterbacks and no playoff appearances since Manning retired a month after winning Super Bowl 50 in 2016.

Both Hackett and Wilson have been out and about town, so they have a sense of how much the fanbase is counting on this new pairing to return the franchise to its glory days.

“I mean, a lot more people recognize me, which has been a little bit different,” Hackett said. “But it’s been awesome. The community is amazing.”

Wilson and his wife, R&B star Ciara, have been visiting children’s hospitals and making courtside appearances at the NBA playoff games in Denver. He even threw out the first pitch at the Rockies home opener.

Wilson was drafted by the Rockies more than a decade ago and he had an official visit to Broncos headquarters prior to the 2012 draft right after Manning had arrived in Denver for the second chapter of his storied career.

“So, there’s a deep love for the city for me” that’s been reignited, Wilson said. 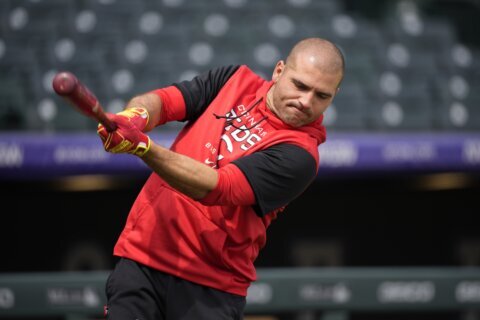 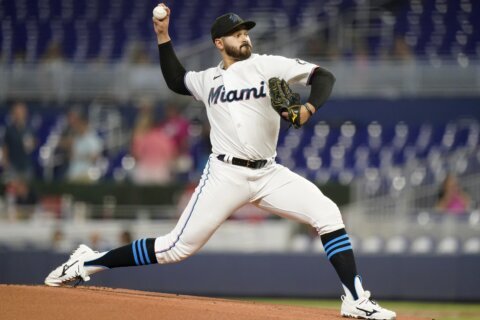