PHOENIX (AP) — Jose Siri could have been content with a single in the ninth inning. For better or worse,…
Listen now to WTOP News WTOP.com | Alexa | Google Home | WTOP App | 103.5 FM

PHOENIX (AP) — Jose Siri could have been content with a single in the ninth inning. For better or worse, that’s just not the way he plays the game.

Siri sparked the Astros with a hustle double that started a two-out rally, Michael Brantley drove him home two batters later and Houston edged the Arizona Diamondbacks 2-1 on Tuesday night.

“I knew it was a risk,” Siri said of his dash to second. “But sometimes, you’ve got to take risks to win games.”

The game was tied at 1 in the ninth when the Astros pieced together their rally against Mark Melancon (0-1), which was started by Siri’s double into right-center. It looked as though it would only be a single but the 26-year-old never stopped as he rounded first base, sprinting into second as Pavin Smith’s throw was late.

Jose Altuve followed with a walk and then Brantley pounced on the first pitch, slicing a single into left field for his third hit of the game to score Siri.

Ryan Pressly handled the bottom of the ninth for his third save, working around a leadoff single by Seth Beer. Pressly struck out Carson Kelly on a high fastball to end it.

“We won another close one,” Houston manager Dusty Baker said. “That’s one of the secrets to winning this thing — you’ve got to win the close ones.”

Siri, batting ninth, gave the Astros a 1-0 lead in the fifth with a 456-foot homer that landed on the concourse in left-center.

Brantley said Siri is a guy who “pushes the envelope” and no one was surprised when he took the extra bag in the ninth, even after getting thrown out stealing in the seventh.

“That’s the way he plays,” Brantley said. “He’s been playing that way since he got here, day one.”

The Diamondbacks evened the score in the sixth when Christian Walker hit his own no-doubt drive into the left-field seats. But that was the only big hit for Arizona’s struggling offense, which is batting just .130 through five games.

Diamondbacks starter Madison Bumgarner gave up one run and five hits over five innings, walking two and striking out two.

Diamondbacks pitching coach Brent Strom faced his former team for the first time since leaving Houston during the offseason.

Strom had a successful run as the Astros’ pitching coach from 2014-21. Over the past four seasons, Houston led the majors with 5,339 strikeouts and 277 quality starts. The Astros were second during that span with a 3.60 ERA.

The Diamondbacks called up INF Yonny Hernandez and sent 1B/3B Drew Ellis to Triple-A Reno. Ellis had one hit in eight at-bats and struck out four times in the season-opening series against the Padres.

Astros: RHP Lance McCullers Jr. was on the field before the game and threw 25 times from 60 feet. He’s trying to come back from a flexor strain sustained during the playoffs last season. … Baker told reporters that DH Yordan Alvarez was “under the weather” and wasn’t at the ballpark. Baker said a few coaches were sick, too.

Diamondbacks: RHP Zac Gallen was originally scheduled to make his first start of the season Tuesday, but was scratched on Monday because of a small cut on his right thumb. Arizona manager Torey Lovullo told reporters Gallen would likely pitch against the Mets this weekend in New York.

The Astros and Diamondbacks wrap up their two-game series with a day game Wednesday. The Diamondbacks will send RHP Merrill Kelly (0-0, 0.00 ERA) to the mound to face LHP Framber Valdez (1-0, 0.00). 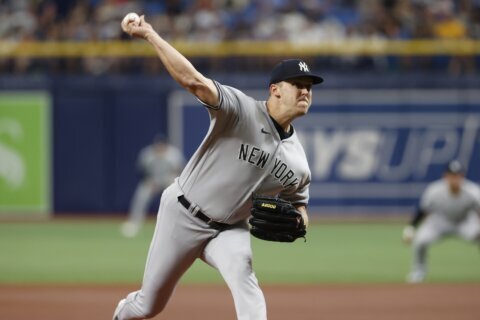 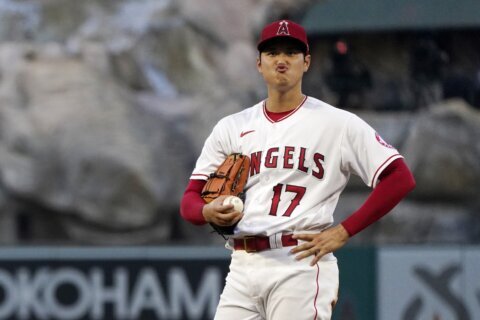