Ohtani open to longterm talks with Angels in offseason

Ohtani spoke before the Angels’ regular-season finale in Seattle, then led off with his 46th home run to reach 100 RBIs for the first time in the major leagues.

Ohtani could have pitched on turn on the final day of the season, but opted to skip his final start. He was the designated hitter in the Angels lineup for the last game of a possible MVP season.

“Of course I’ll be very open to negotiation. I mean the team is supporting me for this whole four years and I’m really appreciative of that,” Ohtani said through an interpreter. “Whether or not there’s any contracts extensions I just want to, like I said earlier, be ready and be ready for next season.”

Ohtani is finishing his fourth season with the Angels and is signed to an $8.5 million, two-year contract that pays $5.5 million next year in its final season. He is eligible for salary arbitration after the 2022 season and free agency following the 2023 season, if the rules do not change following the expiration of the collective bargaining agreement on Dec. 1.

Ohtani is the presumptive leader in the AL MVP race after going 9-2 with a 3.18 ERA in 23 starts on the mound.

“I was really happy to get through the season without any injuries,” Ohtani said. “And honestly, I wish I could have done a season like this a little earlier. This is my fourth year so I think it took a little too long.”

But the team performance on the field hasn’t matched Ohtani’s aspirations when he arrived from Japan’s Hokkaido Nippon Ham Fighters in 2018. The Angels will finish in fourth place in the AL West for the fourth straight season, besieged by injuries to Mike Trout and Anthony Rendon. Los Angeles has yet to post a record above .500 since Ohtani arrived.

“I think the biggest thing is the guys that we have right now we need to have an offseason so we can stay healthy the whole next year so we could compete,” Ohtani said. “Any addition during the offseason, I mean I’ll be looking forward to seeing all the additions that they’re going to make.” 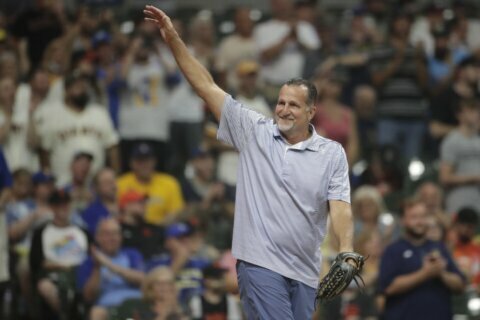