LOS ANGELES (AP) — Luke Jackson threw the pitch he wanted in the exact location he wanted it, and Cody Bellinger still hammered that above-the-letters fastball deep into the frenzied right field stands at Dodger Stadium for a tying three-run homer in Game 3 of the NL Championship Series.

“Sad thing is, I would do the same thing again,” the dismayed Atlanta reliever said.

The Braves realize even the best-laid plans and the best-located pitches can go wrong in the postseason, particularly when you’re facing the Los Angeles Dodgers.

They’re determined not to allow the shock of the Dodgers’ stunning, come-from-behind 6-5 victory Tuesday night to interrupt their quest to knock off the defending World Series champions.

“To feel like this is like a dagger? No,” said Jackson, who gave up four runs on four hits in the eighth after starting the postseason with six consecutive scoreless outings.

“This is just, you know, a speed bump in the road,” Jackson added. “And I wish it didn’t happen, and I wish we were up 3-0 going into Game 4 and having a chance to sweep, but I have no doubt at all in our team coming back and (being) stronger tomorrow and ready to recollect and roll.”

For the second straight season, the Braves had a 2-0 NLCS lead on the Dodgers. Once again, the Braves missed their chance to put their big-budget opponents into the deepest of series holes.

And this heartbreaker probably stung the Braves a whole lot more than last year’s 15-3 loss in Game 3.

A blowout is a whole lot easier to shake off than a defeat in which the Braves had a three-run lead with five outs to play, but failed to close out their 106-win opponents.

“We have lost tough games before and bounced back and done really good things,” Atlanta manager Brian Snitker said. “So this is just one of them games that it’s like, you’ve got to get 27 outs, man.”

The first 22 outs went quite well, but two relievers out of Atlanta’s fairly reliable bullpen couldn’t hold the lead.

Atlanta’s 4-5-6 hitters then struck out against Dodgers closer Kenley Jansen, and a series that appeared to be moving the Braves’ way in a landslide abruptly shifted course heading to Game 4 on Wednesday night.

The Dodgers have made nine straight playoff appearances and won three of the previous four NL pennants with some of the most expensive rosters in baseball history. But as Snitker and Jackson pointed out, the Braves are no postseason neophytes: They’re making their fourth straight playoff appearance, and they’ve learned from their experiences — particularly last season, when they blew 2-0 and 3-1 NLCS leads to Los Angeles.

“Being here again, I think everyone has got a little comfortability and knows that we can compete,” Jackson said. “We’re a great team, and we’ve got a great bond together in the clubhouse and I think that pulls real hard.”

The Braves had held the Dodgers to four hits in the first seven innings of Game 3, with Charlie Morton and his bullpen largely quieting LA’s wealth of offensive talent. The Dodgers then got six more hits off Jackson and Chavez in the eighth.

Bellinger, a former NL MVP in a nightmare year, batted just .150 against fastballs in the regular season and struggled to hit high pitches. Yet he improbably got every bit of that 95.6 mph fastball above the zone from Jackson, crushing it 399 feet.

Chris Taylor then singled and eventually scored when Betts came through with the latest in his long series of clutch hits for the Dodgers, connecting on another solid pitch from the veteran Chavez, a Los Angeles-area native who has played for both the Dodgers and the Angels.

Snitker and his players can take comfort in the fact plenty of things went well for Atlanta before it all went wrong in Game 3.

Atlanta’s hitters got to one of the Dodgers’ star pitchers fairly early again, too: After chasing Max Scherzer in the fifth inning of Game 2, the Braves got Walker Buehler off the mound in the fourth inning, tagging him for seven hits and four runs.

The game seemed relatively safe with a three-run lead for the Braves’ bullpen, which posted a 3.97 ERA during the regular season that was good for 10th in the majors.

The relievers will have to shake off this shock quickly, and Snitker hasn’t lost any faith: The manager confirmed he plans to throw a bullpen game Wednesday night. 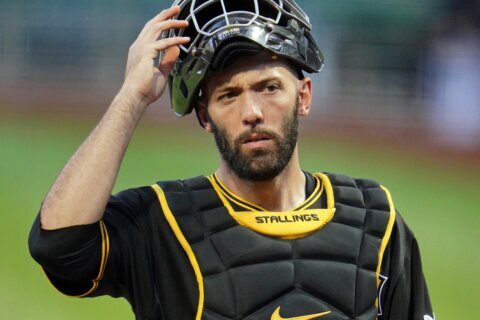