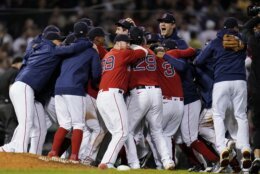 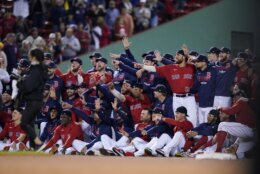 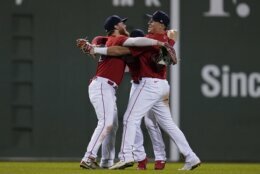 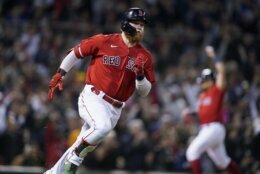 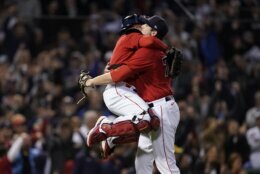 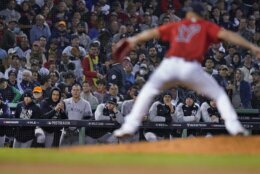 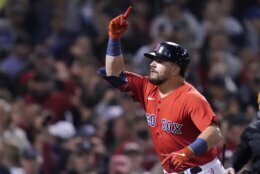 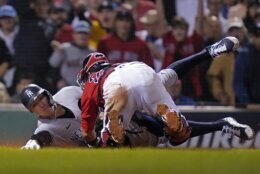 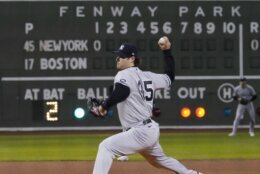 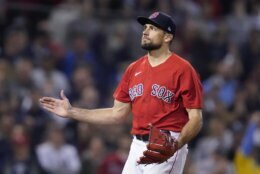 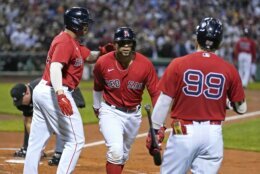 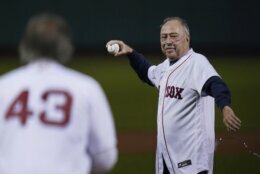 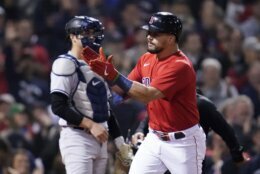 BOSTON (AP) — As the ball sailed over the center field fence, landing 427 feet from the plate in a horde of happy Red Sox fans, Xander Bogaerts turned to the Boston dugout to flex his muscles before resuming his home run trot.

This is the matchup the Yankees wanted.

And the Red Sox were ready.

Bogaerts and Kyle Schwarber homered off Yankees ace Gerrit Cole, and Nathan Eovaldi took a shutout into the sixth inning in the AL wild-card game to help the Red Sox beat New York 6-2 on Tuesday night.

Bogaerts also cut down Aaron Judge at the plate in the sixth as Boston advanced to the best-of-five AL Division Series against the Rays.

“Now we go to the next one, and we’ve just got to be ready to face a great baseball team,” Red Sox manager Alex Cora said. “Coming into the season, everybody talked about them being the best team in the big leagues, and we have a huge challenge. But we’re ready for it.”

The Yankees, who lead the majors with 27 World Series championships, have not won it all since 2009. After angling for a matchup with the Red Sox in a potential tiebreaker, the Yankees wound up in Boston for the wild-card game instead.

And the Red Sox beat them in the postseason for the third straight try.

“Guys are crushed,” New York manager Aaron Boone said. “The ending is really cruel. But there’s nothing better than competing for something meaningful.”

A year after baseball took its postseason into neutral site bubbles to protect against the pandemic, a sellout crowd of 38,324 — the biggest at Fenway Park since the 2018 World Series — filled the old yard to rekindle one of the sport’s most passionate rivalries. Enough Yankee fans were among them to fuel a raucous back-and-forth of insulting chants.

“The Bogaerts homer in the first inning — I mean, talk about a pop. And, you know, the crowd went nuts, and you feed off that energy,” Schwarber said. “You thrive for that, and Red Sox nation brought it tonight. We needed it, and you can’t say enough about the crowd.”

It was the fifth playoff matchup between the longtime foes, with Boston taking a 3-2 edge. That doesn’t count the 1978 AL East tiebreaker — technically regular season Game No. 163 — that the Yankees won thanks to Bucky Dent’s homer into the net above the Green Monster.

Boone was a New York third baseman when added to the heartbreak with his 11th-inning walk-off homer in Game 7 of the 2003 AL Championship Series.

The Red Sox haven’t lost to them since.

They got their revenge the next year when they rallied after losing the first three games of the ALCS to eliminate the Yankees, then went on to win their first World Series title in 86 years. They won three more championships, in ’07, ‘13 and in ’18 when they knocked out the Yankees in the divisional round.

Any lingering pain disappeared into the center field bleachers in the first inning on Tuesday night.

Unlike Dent, who barely cleared the left-field wall that sits just 310 feet from home plate, Bogaerts drilled a line drive 427 feet to straightaway center. And unlike Carlton Fisk, who contorted his body to will the ball fair in Game 6 of the 1975 World Series, Bogaerts interrupted his home run trot only to flex for the Red Sox dugout.

With Dent in the crowd and Aaron Boone in the Yankees dugout, the Red Sox chased Cole in the third after he allowed Schwarber’s solo shot and put two more men on with nobody out. In all, he was charged with three runs on four hits and two walks, striking out three in two-plus innings.

Cole said he felt “sick to my stomach.”

“This is the worst feeling in the world,” said the star who signed a $324 million, nine-year deal to join the Yankees for the 2019 season.

Eovaldi only allowed two hits through five innings before giving up a solo home run to Anthony Rizzo — Schwarber’s teammate on the 2016 Cubs championship team — that sparked the first excited cheers from the Yankees fans in the crowd.

With Boston leading 3-1, Judge followed with an infield single that finished Eovaldi, and reliever Ryan Brasier gave up a wall single to Giancarlo Stanton. Mistakenly waved home by third base coach Phil Nevin, Judge was easily thrown out at the plate — 8-6-2 — by the team that led the majors with 43 outfield assists during the season. (The Yankees made 22 outs at home this season, tied for the most in baseball.)

“That was better than a homer for me, personally,” Bogaerts said. “I mean, if that run scores, it’s 3-2. Stanton is at second base, the whole momentum is on their side. The dugout is getting pumped up.”

“As Judge was out at home, I saw Stanton was pretty mad. He probably wanted a homer there, but also an RBI, and he didn’t get that, and he probably felt like he didn’t do much because that run didn’t score. But that changed the game,” he said.

In all, Eovaldi allowed one run on four hits in 5 1/3 innings, striking out eight.

Alex Verdugo hit an RBI double in the sixth, driving in a hustling Bogaerts from first, to make it 4-1 and then singled in two more in the seventh to give Boston a 6-1 lead.

Stanton, who singled high off the wall early, hit a solo homer in the ninth to make it 6-2. Joey Gallo followed with a deep drive to right that was caught at the warning track by Hunter Renfroe.

With one last “Yankees suck!” chant echoing through the ballpark, Garrett Whitlock got Gleyber Torres to pop up to center to end it.

The Red Sox poured out of their dugout and bullpen to celebrate at the pitcher’s mound as “Dirty Water” played on the speakers. A few Yankees stood in the dugout and watched.

The teams swapped places twice in the last 10 days of the season, starting with the Yankees’ three-game sweep in Boston Sept. 24-26 that moved them into the first wild-card spot. At one point, Major League Baseball ran through the tiebreaker scenarios and the Yankees had to choose whether they would want to play in Boston or Toronto to break a four-way tie.

Although the tiebreakers weren’t necessary when both teams finished ahead of Toronto and Seattle — with identical 92-70 records, Boston earned home-field by virtue of a 10-9 head-to-head record — word of the Yankees’ decision inevitably made it to the Red Sox clubhouse.

“We knew about it. We don’t really talk about it because we had some business to take care of ourselves,” Red Sox center fielder Kiké Hernandez said before the game. “They wanted us and they got us now, so win or go home. That’s it.”

Yankees: 3B Gio Urshela played despite bruising his thigh in the regular-season finale when he fell into the dugout after catching a foul popup.

Red Sox: Boston was without its regular DH, J.D. Martinez, who sprained his ankle in the regular-season finale. Martinez, who was playing the field in Washington, because there was no DH in an NL park, slipped on second base as he ran out to his position in the outfield.

Yankees: Pitchers and catchers are due to report for spring training on Feb. 14.

Red Sox: Open the best-of-five ALDS against Tampa Bay on Thursday. The Rays went 11-8 against Boston this season.

Aggressive use of Scherzer, Urías backfires; LA in NLCS hole