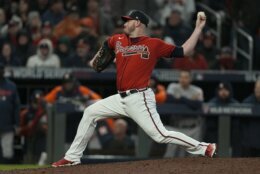 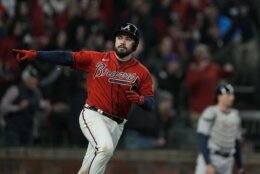 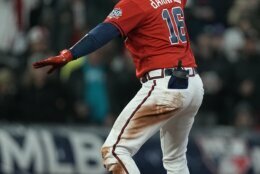 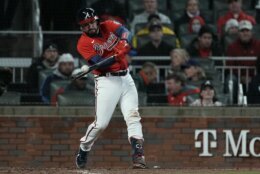 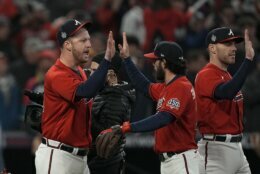 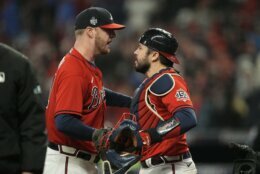 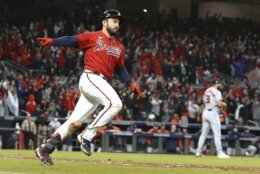 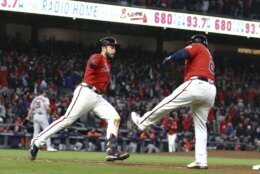 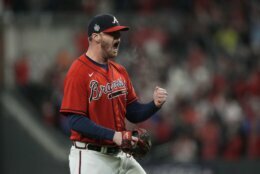 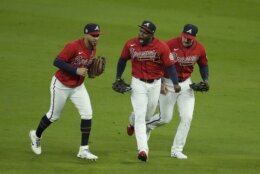 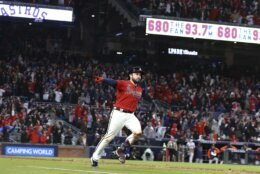 ATLANTA (AP) — Ian Anderson had pitched five no-hit innings when Brian Snitker walked up to the 23-year-old and said, “That’s it.”

“I’m going with my gut right here,” the manager said.

On a night that showed how much baseball has evolved in the Analytics Age, Anderson and the Braves’ bullpen took a no-hit bid into the eighth inning, Austin Riley and Travis d’Arnaud drove in runs and Atlanta beat the Houston Astros 2-0 on Friday to grab a 2-1 World Series lead.

Pinch-hitter Aledmys Díaz blooped a single leading off the eighth against Tyler Matzek that dropped in front of Eddie Rosario, just 232 feet from home plate, for Houston’s first hit as the left fielder pulled up to avoid colliding with shortstop Dansby Swanson.

Alex Bregman grounded a single through the wide-open right side of a shifted infield leading off the ninth against Will Smith, who remained perfect in five save chances this postseason.

Anderson threw 76 pitches, and A.J. Minter, Luke Jackson, Matzek and Smith combined for the last 57 of the 18th two-hit shutout in Series history.

“Obviously you want the chance to compete, especially on the biggest stage like this is,” Anderson said. “But, yeah, I knew he wasn’t going to budge.”

Snitker didn’t consider giving Anderson a chance to join the Yankees’ Don Larsen, whose perfect game in 1956 is the only Series no-hitter.

Anderson struck out four and walked three, throwing just 39 of 76 pitches for strikes.

“He was effectively wild,” Astros manager Dusty Baker said. “Our guys never could zero in on the strikes.”

“He’s turned into an absolute animal, a beast in the playoffs,” Matzek said.

Complete games are near extinction. The closest Anderson came to a no-hitter in the minors was on June 28, 2019, when he was pulled after seven innings and 102 pitches for Double-A Mississippi against Jackson, and teammate Jeremy Walker finished with hitless relief.

“Luke Jackson didn’t know. Minter didn’t know,” Matzek said of the no-hit bid. “After I got done with my inning, they went up and said: `Hey, did you know you gave up the first hit?’ And I said, `Yeah, I did know. I paid attention.’”

Of the 60 previous times the Series was tied 1-1, the Game 3 winner went on to win 39 times — including six of the last nine.

Riley hit an RBI double in the third on a cutter from rookie Luis Garcia after Freddie Freeman singled, and d’Arnaud added his second Series homer in the eighth, a 437-foot drive off Kendall Graveman that was d’Arnaud’s first long ball at home since September 2020.

Atlanta, which stranded nine runners, improved to 6-0 this postseason at Truist Park, which opened in 2017 and where it has won 11 of its last 12 games. The Braves stopped a five-game home World Series losing streak.

Houston, the top-hitting team in the majors during the season with a .267 average, was limited to seven baserunners.

“We didn’t swing it for one game,” Bregman said. “I think we flush it and move on to the next day and have a short memory.”

Díaz’s hit ended the longest no-hit bid in the Series since Game 2 in 1967. Boston ace Jim Lonborg pitched a one-hitter and allowed a two-out double in the eighth to St. Louis’ Julian Javier.

Pinch-runner Jose Siri stole second with two outs in the eighth and went to third when d’Arnaud’s throw skipped into center field for an error, but Siri was stranded when Michael Brantley popped out against Matzek.

On a damp 49-degree night, rookie starters matched up in the Series for just the eighth time. Garcia gave up three hits in 3 2/3 innings with six strikeouts and four walks. He threw 72 pitches and came out after getting the first two outs of the fourth with just two pitches.

While Baker (72) and Snitker (66) had the highest combined ages of World Series managers, they lifted their starting pitchers on the timetable triggered by modern metrics — after exactly 18 batters each, not wanting leadoff hitters to face the same pitcher for the third time.

Snitker, in his 44th season with the Braves, knows a few years ago he would have let Anderson stay in.

“The me of old, probably a couple years ago,” Snitker said, “I’m how the hell am I doing this?”

Baker had hitting coach Troy Snitker go to the plate to exchange lineup cards with his dad, the Braves’ manager.

Zack Greinke will start Game 4 on Saturday night for Houston, while the Braves go with the first of consecutive bullpen games in response to losing Game 1 starter Charlie Morton to a broken leg.