The division-leading Giants (103-54) maintained a two-game lead over the rival Dodgers, who beat the Padres at home. Los Angeles (101-56) has won the last eight West titles.

“Obviously we’re close. We don’t want to put pressure on ourselves,” Flores said. “We’ve been doing it all year. We’re going to keep doing it this week. We’re going to show up tomorrow and in our minds it’s just win that day.”

The Giants loaded the bases in the sixth against Sean Poppen (1-1), starting with Evan Longoria reaching on a throwing error by shortstop Josh Rojas. Buster Posey drew a bases-loaded walk in the inning and later scored on a wild pitch.

Mike Yastrzemski drew a bases-loaded walk in the first from Luke Weaver, and the D-backs tied it on a sacrifice fly by Rojas in the third.

“That was one heck of a first inning. I don’t think I’ve ever done that before,” Weaver said.

Jake McCarthy homered in the seventh for the D-backs.

José Álvarez (5-2) pitched a 1-2-3 sixth for the win. Camilo Doval allowed a one-out double to pinch-hitter Geraldo Perdomo before finishing for his first career save.

Logan Webb struck out six and walked two, not allowing an earned run over five innings in a third straight no-decision and fourth in his last six starts. He remained unbeaten since a loss May 5 at Colorado. Arizona used an entirely left-handed lineup against Webb, with Ketel Marte the lone switch-hitter among the starters.

Webb, facing Arizona for the first time this season and only the third time ever, escaped a bases-loaded jam in the fourth unscathed when he induced Josh VanMeter’s inning-ending double play.

The Giants found enough offense without first baseman and home run leader Belt, who broke his thumb while squaring to bunt in the seventh inning of Sunday’s 6-2 win at Colorado.

In addition, an X-ray on outfielder Alex Dickerson’s left foot was negative and Tommy La Stella exited with discomfort in his left Achilles tendon.

Giants: Belt, who had an X-ray on Monday that showed the broken bone, went on the injured list after meeting with hand specialist Dr. Scott Hansen to determine his next steps. The 33-year-old Belt is batting .274 with a career-high 29 homers and 59 RBIs. “This is going to be another challenge, but he’s been here before,” manager Gabe Kapler said, noting that if Belt is lost for the remainder of the season, “we’re prepared for anything.” … Closer Jake McGee (strained right oblique) will throw a bullpen session Wednesday. He is also wearing a bulky brace on his left knee. … RHP Johnny Cueto could be activated from the IL soon after nursing a strained pitching elbow. … The hope is for INF Darin Ruf (strained right oblique) to be back in the lineup Thursday.

The Giants recalled INF/OF Thairo Estrada from Triple-A Sacramento to take Belt’s roster spot. Estrada was hit in the fingertips on his right hand and was expected to have an X-ray.

Arizona RHP Merrill Kelly (7-11, 4.59) pitches Wednesday with a three-start losing streak and has gone 0-4 over his last five starts since beating the Cubs at Wrigley Field on July 24. 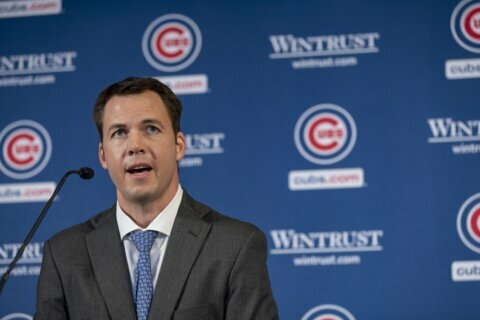