PHOENIX (AP) — It hasn’t taken long for the San Francisco Giants to make a strong impression on Kris Bryant.

Bryant doubled to start a four-run ninth inning rally to tie Arizona, then doubled again to score the eventual winner as the Giants came back to beat the Diamondbacks 5-4 on Thursday.

“We had no business winning that game,” said Bryant, who had hits in each of his last three at-bats. He arrived from the Chicago Cubs in a deadline deal last week.

LaMonte Wade Jr. tied it with a two-out single in the ninth. The Giants (69-40) moved four games ahead of the idle Los Angeles Dodgers in the NL West.

Wade fell behind 0-2 against Tyler Clippard, who was trying to close out a victory for Merrill Kelly following the starter’s eight innings of three-hit shutout pitching. Wade worked the count full and finally drove a single to right, bringing in two runs to tie it up.

“There’s so many guys that can do it,” Bryant said. “If you’re not feeling it one day, you pass the torch to someone else.”

Wade was the man on the spot in the ninth, capping a rally that eventually led to the Giants’ 12th win this season in 14 games against the Diamondbacks.

“Super impressed,” Bryant said about Wade, who was 0 for 4 entering that at-bat and found himself in the hole.

“Treat it like it’s 0-0,” Wade said of his full-count approach. “Relax and stay focused.”

He took two close pitches in the sequence, fouled off a few more and then delivered the tying blow.

For the Diamondbacks, a major league-worst 34-76, it was another frustrating finish in a long season that still has 52 games to go.

Kelly gave up three hits in eight innings, walking two and striking out four. The Giants only had two runners get to second base. He threw 102 pitches and left for a pinch hitter in the bottom of the eighth.

“I just kind of had an overwhelming calm about the game today,” Kelly said. “My last pitch was a 93 mph cutter. I think I could have gotten three more outs.”

Diamondbacks manager Torey Lovullo felt as if his bullpen could take it from there.

“It wasn’t worth it,” Lovullo said. “He had (thoracic outlet) surgery last year, At 102 pitches, I felt like he did his job.”

Bryant started that rally with a double off reliever Taylor Clarke. Alex Dickerson and Brandon Crawford followed with hits, and Clippard came in. He hit Donovan Solano with a pitch and Brandon Belt’s single brought in the second run. Clippard retired pinch-hitters Buster Posey and Wilmer Flores before Wade’s single tied it.

Tyler Rogers (3-1) pitched a scoreless ninth for the victory. Jake McGee got the last three outs for his 24th save as the San Francisco bullpen worked six innings without giving up a hit.

Arizona’s Tyler Gilbert (0-1), in his second major league game, allowed the unearned run with the extra-inning runner to take the loss.

The Diamondbacks struck early against Alex Wood. Nick Ahmed doubled to center leading off, moved to third on a flyout and after a pair of walks, Smith lined a hit just to the right of second baseman Solano to score two runs.

Smith, who was out for a week on the COVID-19 list, delivered again in the third following singles by Carson Kelly and Christian Walker. Smith’s single under Solano’s glove brought Kelly home. Jake Hager later walked with the bases loaded for his first major league RBI and a 4-0 Arizona lead.

Wood lasted four innings, throwing 80 pitches. He walked three, hit a batter and struck out five. Because his teammates came back in the ninth, he still has not been charged with a loss since June 1.

The Giants finish 2021 with a 8-2 record at Chase Field. They have two series left at home against the Diamondbacks, and they swept a four-game series earlier this season at Oracle Park.

Since the start of last season, San Francisco is 20-4 against Arizona — the best record in any head-to-head series with a minimum of 15 games over that span.

Giants: Belt, sidelined since June 25 with right knee inflammation, was activated Thursday and batted seventh at his familiar first base spot. He was 1 for 3 with a walk.

To make room on the roster, the Giants placed RHP Kevin Gausman on the paternity list. The Giants were carrying only 11 pitchers on Thursday; they used seven of them.

Diamondbacks: With Pavin Smith’s return, veteran OF Josh Reddick was designated for assignment.

“He had solid at-bats for us, but the reality was that the playing time was drying up,” Lovullo said. “We need to see what some of the younger players can do.”

Arizona also activated RHP Riley Smith from the injured list, then optioned him to Triple-A Reno. To clear a spot for Clarke (arm), the Diamondbacks sent RHP J.B. Bukauskas to Reno. 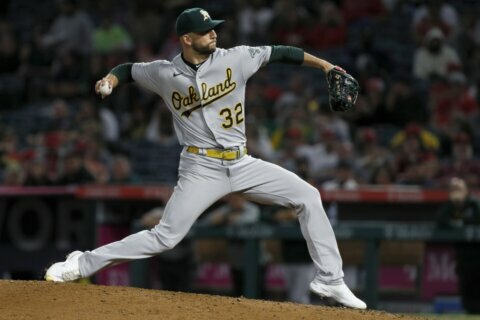 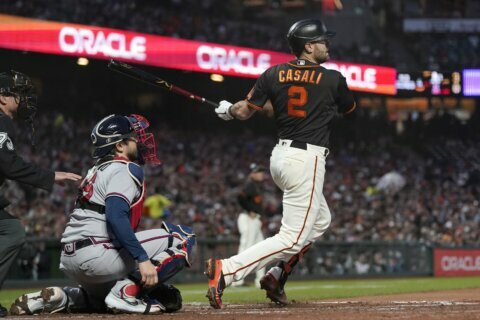