ARLINGTON, Texas (AP) — The Houston Astros finally have their primary lineup back together on the field. The AL West leaders also have left-hander Framber Valdez throwing strikes.

Yordan Álvarez homered for the fifth time in eight games, Carlos Correa also went deep and Valdez had another impressive start in a 5-2 victory over the rookie-laden Texas Rangers on Saturday night.

Valdez (9-4) struck out seven and walked one over seven innings while giving up two runs and three hits. The left-hander threw 61 of 85 pitches for strikes, after going seven scoreless innings in his previous start.

“I think he was better this time than last time,” manager Dusty Baker said. “He’s under control, he’s throwing his breaking ball at will, and he was very relaxed. … When he’s throwing strikes like that, quality strikes, he’s not walking people and he’s very hard to hit.”

All-Star outfielder Adolis García, one of six rookies in the starting lineup for the last-place Rangers (44-85), hit his 28th homer in the sixth, the first homer allowed by Valdez over six starts. They still lost their fifth game in a row and are an MLB-worst 9-30 since the All-Star break.

Valdez threw six no-hit and scoreless innings with six walks against Texas on July 24, when he needed 99 pitches. He threw only nine pitches to get through the first inning Saturday night, and retired 10 of the first 11 batters he faced while Houston jumped ahead 4-0.

For the first time since June 16, the day third baseman Alex Bregman strained his left quad and was then out until Wednesday, Baker had his top six batters all together in the starting lineup (Jose Altuve, Michael Brantley, Yuli Gurriel, Álvarez, Correa and Bregman), along with Kyle Tucker and Martin Maldonado, the other remaining players from the opening-day lineup.

“Everybody’s really happy with having everybody back,” Álvarez said through a translator. “Just seeing the lineup in the clubhouse today, everyone knows what’s we’re capable of, and I think we’re just all very motivated.”

Álvarez led off the second with his 27th homer to put the Astros up 1-0. His shot to straightaway center field off Kolby Allard (3-11) went just beyond the reach of the outstretched glove of Leody Taveras when he leaped at the 8-foot wall.

Correa reached 20 homers for the fifth time in his seven big league seasons with his 436-foot solo drive into the second deck of seats in left field in the third.

Isiah Kiner-Falefa led off the Rangers fourth with a slow roller and ran all the way to third after Valdez fielded the ball and threw into right field. But home plate umpire Chad Fairchild immediately called interference for Kiner-Falefa running to first in fair territory. Garcia then singled, before a hit batsman, a walk and fielder’s choice grounder that sent him home.

Andy Ibañez, another Rangers rookie, was 0 for 2 with a walk before exiting with tightness in his left hamstring. That ended his 11-game hitting streak, which matched the longest for Texas this season and included multiple hits in each of the last seven games. … Bregman had impressive plays, one a barehanded pickup of a slow roller, to get out the first two Rangers batters of the game. He later had a backhanded snag of a liner.

Astros: RHP José Urquidy is expected to make another rehab start Sunday for Triple-A Sugar Land. He has been on the injured list since June 30 because of right shoulder discomfort.

Rangers: Woodward said most of the seven Texas players on the COVID-19 related injured list are “doing well.” He said the guys out because of close contact are doing baseball activity, and some could return as early as Tuesday. . 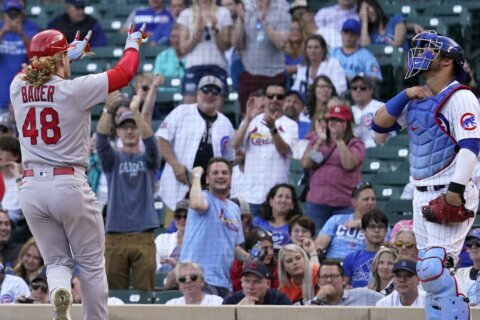 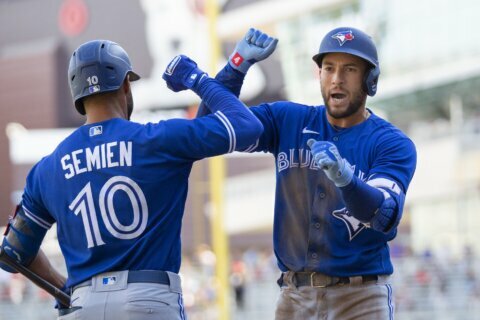