A day after the Braves lost star outfielder Ronald Acuña Jr. to a season-ending knee injury, their hitters had no answers for López’s early dominance.

López set the mark on the one-year anniversary of his father’s death.

“There were a lot of emotions and mixed feelings out there today. My dad meant so much to me in my progression,” López said. “Being able to perform and get (that accomplishment) was really cool and really special.”

López struck out Ehire Adrianza, Freddie Freeman and Ozzie Albies each swinging in the first inning. He then fanned Austin Riley, Orlando Arcia and Dansby Swanson also all swinging in the second inning.

In the third, Guillermo Heredia looked at strike three, Kevan Smith went down swinging and Ian Anderson was called out on strikes.

The 25-year-old López broke the mark of eight straight strikeouts to begin a game set by Jim Deshaies in 1986 and matched by Jacob deGrom in 2014 and German Marquez in 2018.

”(Pablo) was on a little bit of a mission today,” said Miami manager Don Mattingly, who admitted not knowing that his starting pitcher was making history. “All I knew is that he punched out nine guys and really stuck with me at the time.”

Mattingly knew López was having a special day the first time he glanced over at the left-field scoreboard, where the pitch count was posted.

“I look up there and he has 11 strikes in 11 pitches,” he said. “That’s when you kind of know something big is starting to happen.”

López (5-5) threw 30 of his first 35 pitches for strikes. The Venezuelan began the day with 102 strikeouts over 95 innings in 18 starts this season.

“I wanted to execute and not leave anything out over the plate to those guys,” he said “I just wanted to get ahead in the count and use my purpose pitches to set up other pitches.”

Adrianza became the first Atlanta hitter to put a ball in play when he grounded out on an 0-1 pitch to begin the fourth. Freeman doubled for the Braves’ first hit, setting up RBI singles by Albies and Arcia.

López gave up three runs in six innings — after his sensational start, he didn’t strike out anyone in his final three innings.

López gave up five hits and walked two, with 65 of his 83 pitches for strikes.

Jesus Aguilar hit a three-run homer in the first inning off Anderson (5-5) as the Marlins ended a three-game losing streak. Jesus Sanchez tripled, doubled and singled and Miguel Rojas had three hits for Miami.

Sanchez, who enjoyed his first career three-hit game, could only marvel at López’s historic performance with the rest of the fielders.

“Playing in left, I’m kind of looking over at the other outfielders and shaking my head like what is going on in there with Pablo,” Sanchez said. “It was a lot of fun, for sure.”

“We had a little run there (after the first three innings) and I thought we might get back in it, but it didn’t happen,” Atlanta manager Brian Snitker said.

Along with the 9,456 fans in attendance, there were 388 pooches on hand as part of the Miami Marlins’ first “Bark At The Park” promotion since 2019.

Braves: Recalled INF/OF Johan Camargo from the Triple-A Gwinnett and placed Acuña on the 60-day injured list with a torn ACL in his right knee.

Braves: Return to action after the All-Star break by hosting Tampa Bay on Friday night.

Marlins: At Philadelphia on Friday night to start the second half. 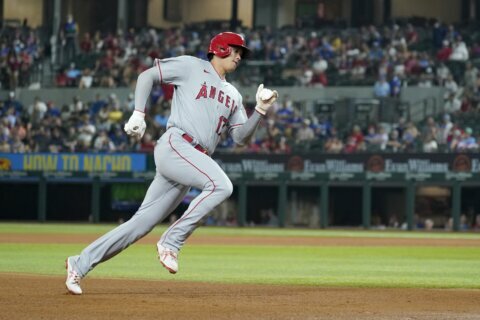