Snell (2-2) struck out 10 and pitched into the seventh inning for the first time this season. Francisco Lindor ended his no-hit bid with a single leading off the seventh — a ball left fielder Tommy Pham misplayed for a two-base error.

The left-handed Snell got three straight outs, including two strikeouts, to strand Lindor at third.

“I just said this is my night, I am not letting anyone cross the plate. It was just kind of a mindset that I was going to throw fastballs and I was going to make them swing,” Snell said. “As that inning went, I just knew I was going to have a lot behind every fastball so I might as well throw it as hard as I can and see what they can do with it.”

The 2018 AL Cy Young Award winner with Tampa Bay had a 5.55 ERA in his first season with San Diego prior to Friday, but he showed excellent control and relied heavily on his fastball with some curveballs peppered in to keep New York off balanced. He threw a season-high 101 pitches and walked one.

“The belief in me has always been really strong so good or bad it doesn’t matter, I know who I am,” Snell said. “That was the secret today, I just pitched. I threw what I wanted to throw and made sure I threw strikes as frequently as I could.”

Lindor also had a deep fly to the center-field wall in the third for a long out, the only near hit by the Mets until Lindor’s subsequent single.

“Nobody wants to get no-hit. I don’t want to be a part of that,” Lindor said. “He located the pitches he needed to locate. He is a really good pitcher, hats off to him.”

Machado tagged Mets starter Joey Lucchesi (1-4) for a solo homer to left in the first for a 1-0 Padres lead. Lucchesi went 4 2/3 innings, giving up four hits and one run.

“It was nice, Manny steps up in the first and gives us the lead,” Padres manager Jayce Tingler said. “I know this is a very good way to start the homestand.”

Machado also walked with the bases loaded and two outs in the seventh against Jeurys Familia, who relieved a jam left by Drew Smith. Familia got Jake Cronenwoth to fly out to center after walking Machado.

Mark Melancon pitched a scoreless ninth after giving up two singles to earn his major league-leading 19th save.

The Mets’ James McCann was ejected by plate umpire Quinn Wolcott after arguing a called third strike. New York manager Luis Rojas charged out of the dugout and was also tossed.

The Padres have won 12 straight home games since May 5, San Diego’s longest-ever winning streak at home, regardless of stadium. It eclipses an 11-game home winning streak in 2005.

Mets: INF Jonathan Villar (right hamstring tightness) exited the Mets’ June 2 win over Arizona and has been day-to-day. He came off the bench to pinch-hit in the sixth on Friday.

Padres: Pham (stitches in jaw) was back in the lineup after sitting out Thursday’s game following a Wednesday collision with teammate Ha-seong Kim in a game versus the Cubs. A CT scan on his jaw revealed no breaks. … CF Trent Grisham did not play baseball on Friday night — either in San Diego or on a rehab stint with Triple-A El Paso as the team had hoped. Manager Jayce Tingler said Grisham is still feeling very minor effects of the heel bruise when he decelerates while running.

Padres: RHP Joe Musgrove (4-4, 2.08) will start Saturday evening in the third game of the series. 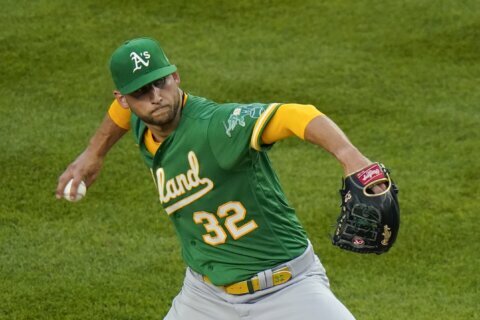 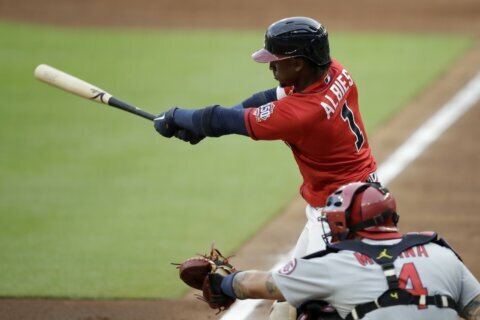