PHILADELPHIA (AP) — Aaron Nola allowed three hits and struck out nine, leading Philadelphia over the New York Yankees 7-0 Sunday for a two-game sweep that moved the Phillies back over .500.

Odubel Herrera, Jean Segura and J.T. Realmuto combined to go 7 for 13 with a double, a triple, four runs scored and five RBIs. Philadelphia has won four straight games and three straight series during a 6-1 homestand, giving the Phillies a winning record for the first time since they were 22-21 before play on May 20.

“We have a team that can be an all-around, really good team,” said Andrew McCutchen, who was 2 for 3 with a run and two RBIs. “We can hit, we can pitch and we can field. We can be that type of team.”

Domingo Germán (4-4) fell behind 4-0 by the second inning, a day after Jameson Taillon trailed 4-0 in the first.

When asked if he felt there was anyone who was getting used to or accepting the team’s struggles, Boone bristled when answering no. “I know them too well and I don’t think there’s any getting used to … losing,” Boone said. “Get out of here with that.”

The Yankees grounded into their major league-high 64th double play. Rougned Odor was caught off second base on Gleyber Torres’ seventh-inning grounder to shortstop, the Yankees 31st runner out on the bases this season. No other team started the day with more than 23.

“We’re grinding over this as much as we can in conversations postgame,” Boone said. “We’ve addressed some things and changed along the way, and we’re going to keep doing that.”

Nola walked one, throwing 103 pitches in 7 2/3 innings while possessing sharper fastball command than he exhibited recently.

“I always have my confidence,” Nola said. “I just had some things not going my way. It was frustrating not getting out fifth inning three of the last four. To myself, that’s not what I usually do. I want to go deep into games and put my team in a position to win. Not having the command that I’m used to having is frustrating. But it doesn’t keep me from keep working on in throwing sessions and bullpen sessions. And I always go into the next game with confidence.”

Phillies manager Joe Girardi shuffled his rotation to keep Nola on four days’ rest despite two off days last week. Nola had six days off before his previous start.

“He wasn’t getting on the mound enough,” Girardi said. “We’re trying to be proactive here because we worry about the back end. But there are times when a guy gets out of his rhythm. He tweaked a few things.”

The Yankees were shut out for the third time this season, and the Phillies pitched their fifth shutout.

Germán allowed seven runs and 10 hits in 4 1/3 innings. The Phillies went 4 for 7 with two doubles against his curveball.

Segura had three hits and became the first Phillies player since 1953 with three or more hits and two or more RBIs in three straight games. He is hitting .424 with seven RBIs in June, raising his average to .339

Realmuto singled in the opening run in the first, and Herrera’s RBI double and Segura’s two-run single built the 4-0 lead.

Yankees: Judge experiencing back spasms while going 1 for 5 Saturday. Boone said post-game that he was unavailable even for pinch-hitting duties and will undergo off-day treatment on Monday. … Boone said he had not received the results of the MRI on the right groin RHP Luis Severino injured Saturday while pitching for High-A Hudson Valley. … INF Luke Voit (left oblique strain) began a rehab assignment with Triple-A Scranton/Wilkes Barre and went 1 for 3 with a double off Buffalo’s Anthony Kay.

Phillies: Girardi said SS Didi Gregorius experienced “a little stiffness and soreness” in his injured right elbow that stopped his rehab assignment with Triple A Lehigh Valley. “We’re working on that and hope he’s in the lineup soon,” Girardi said. Gregorius has been out since May 12. 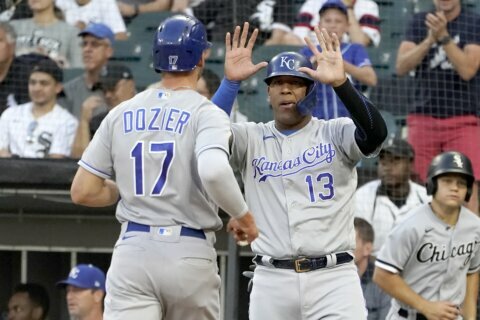 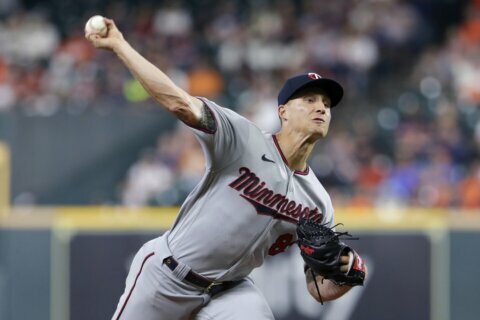 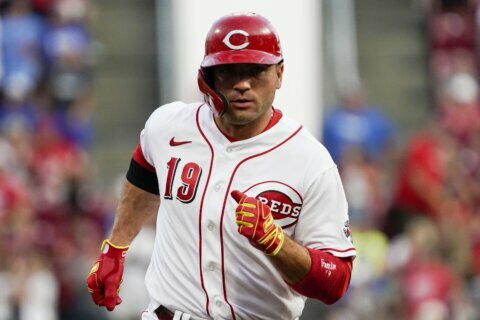