PITTSBURGH (AP) — Adam Frazier tripled home the tying run in the 11th inning with his fourth hit of the game and scored the winner on Gregory Polanco’s sacrifice fly as the Pittsburgh Pirates rallied for a 3-2 victory over the San Francisco Giants on Friday night.

Austin Slater’s single put the Giants ahead in the top of the 11th, but Frazier led off the bottom half with his hit high off the 21-foot Clemente Wall in right field. That scored Michael Perez, who began the inning as the automatic runner on second base.

Polanco found it fitting that he drove in Frazier, who accounted for more than half of Pittsburgh’s seven hits.

“He’s a hitting machine,” Polanco said. “He hits everybody, lefties, righties, and he has a really nice swing. I talked to him after I struck out in the ninth inning and he gave me good advice. He told me to try to hit the ball to the shortstop, up the middle and it worked (in the 11th).”

Baragar had allowed only one run in his previous 30 appearances and 25 1/3 innings dating to Aug. 12.

Reynolds’ run-scoring single in the ninth tied it 1-all.

San Francisco starter Kevin Gausman took a three-hit shutout into the ninth but could not finish it. He was pulled by Kapler after giving up back-to-back singles to Frazier and Newman to start the inning.

“Honestly, those were two really good pitches and they just did a good job of not trying to do too much in that situation and put the bat on the ball and I think both guys broke their bats,” Gausman said. “It’s a disappointing way to go out. I wanted to close the door on this game.”

Giants closer Jake McGee relieved with runners on first and third and was greeted by Reynolds’ hit to right field. McGee then struck out Craig, Polanco and Erik Gonzalez to end the threat.

While Gausman missed out on his first career shutout in the 172nd start of his nine-year career, he did set a personal best with 12 strikeouts. He previously had two 11-strikeout games, including April 24 against Miami.

Gausman allowed five hits and no walks while throwing 96 pitches. He has pitched at least six innings in all eight starts this season and yielded more than one run only once.

Brandon Crawford broke a scoreless tie with a leadoff homer in the eighth to the first row of seats in right field off Duane Underwood Jr.

The Giants managed just four hits against rookie Miguel Yajure and Pittsburgh’s bullpen and did not have a plate appearance with a runner in scoring position.

Yajure pitched five scoreless innings and allowed only one hit, a third-inning single by Gausman, in his second career start. Throwing just 57 pitches, Yajure had four strikeouts and one walk.

Pittsburgh called up Yajure from Triple-A Indianapolis to make what was expected to be a spot start. The move was made to give the other starting pitchers extra rest.

“I felt great,” Yajure said. “I had a little more conviction behind my pitches, and I had a sense of calmness on the mound.”

Pittsburgh manager Derek Shelton would not commit to whether Yajure will stay in the major leagues for another start.

The Pirates were 0 for 5 with four strikeouts against Gausman with runners in scoring position. He also set down Pittsburgh in order the first time through the lineup.

“It was a really good night and a really nice victory,” Shelton said.

Giants: Crawford (COVID-19 vaccination effects) and 1B Brandon Belt (left side tightness) returned to the lineup after missing Thursday’s game. … RF Alex Dickerson (bone bruise in left shoulder) is expected to be activated from the injured list Sunday, the first day he is eligible.

Pirates: GM Ben Cherington said rookie 3B Ke’Bryan Hayes (left wrist strain) continues to progress and is getting closer to a rehab assignment, but a firm timetable for his return to game action has not been set. … RHP Chad Kuhl (right shoulder discomfort) pitched a two-inning simulated game Thursday.

The Pirates optioned RHP Geoff Hartlieb to Indianapolis to open a roster spot for Yajure. Hartlieb has made one major league relief appearance this season, allowing three runs in two innings.

RHP Michael Feliz, who had been designated for assignment by Pittsburgh, was claimed off waivers by Cincinnati. 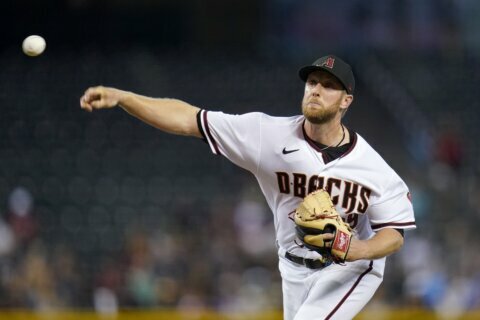