Bichette hit a go-ahead, two-run double in the ninth inning and the Toronto Blue Jays rallied yet again to beat Atlanta 8-4 on Thursday and sweep six games from the Braves this season.

Toronto trailed 2-0 and 4-3 before its 10th comeback win this season and third of the series completed a three-game sweep.

“I think regardless of how we’re playing we should feel like we have a chance,” Bichette said. “We can do special things on offense. I’ve never seen this team give up.”

Atlanta outfielder Ronald Acuña Jr. left in the seventh inning after jamming his left ankle. X-rays were negative and he has not been ruled out of the Braves’ game at Milwaukee on Friday night.

Danny Jansen, hitting .095, led off the ninth with a single off Will Smith (0-3). Marcus Semien singled, and Bichette doubled to the gap in right-center for a 6-4 lead.

Bichette drove in three runs on two hits. Cavan Biggio knocked out Smith with his second double of the game to drive in another run.

Travis Bergen (1-0) pitched a scoreless eighth. Jordan Romano struck out the side in the ninth after starter Ross Stripling allowed two runs in five innings and had nine strikeouts.

“It seems like if our pitching does the job we’re always going to have a chance, and it was true in every one of these three games,” Blue Jays manager Charlie Montoyo said.

Acuña led off the game with his major league-high 12th homer, then got hurt while trying to beat out a grounder to third base.

Acuña initially was ruled safe by first base umpire Mike Estabrook before a video review overturned the call. Acuña hopped down the right-field line, then collapsed onto the outfield grass. He was able to walk back to the dugout with a slight limp.

“Those are scary moments for players, especially when they’ve got the torque and force he’s running with,” Braves manager Brian Snitker said.

Smith gave up four runs and five hits in the ninth while recording only one out. The left-hander’s ERA climbed to 5.02.

Dansby Swanson’s two-run homer in the sixth had given Atlanta a 4-3 lead. The Blue Jays pulled even in the eighth when Biggio’s double drove in Teoscar Hernández, who walked.

Acuña pulled Stripling’s first pitch, an inside fastball, 442 feet down the left-field foul line. The homer landed near the back of the second level.

Blue Jays: RHP Rafael Dolis (right calf) plans to throw a bullpen session on Friday. He was placed on the 10-day injured list after leaving the May 7 game at Houston with tightness in the calf.

Braves: CF Cristian Pache grimaced while running to first base on a groundout in the second and left with right hamstring tightness. 3B Austin Riley, who was given his first break from starting since April 16, entered. Ehire Adrianza, who started at third base, moved to right while Acuña moved to center.

Guerrero may have a secret wish to pitch. The first baseman became a hit on Twitter when he was captured on video mimicking every move of Romano in the ninth inning.

The previous time the Braves were swept in six games by a team in a season series was in 2008, by the Chicago Cubs.

“I guess they just had our number this year,” Smith said.

RHP Alek Manoah (6-6, 260) is proving why he ranks as one of Toronto’s top prospects. Manoah has allowed only three hits while striking out 17 batters in 12 scoreless innings in his first two starts for Triple-A Buffalo.

“If a player wants to come to the big leagues, he needs to push the envelope and that’s what he’s doing there,” Montoyo said, adding Manoah could be promoted “hopefully sometime this year, maybe.” 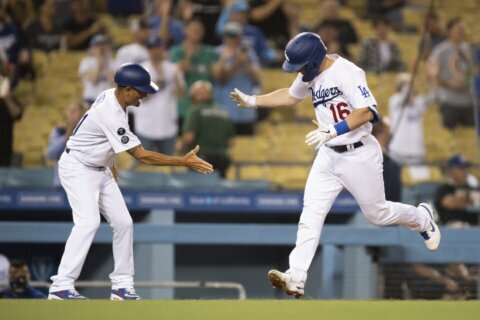 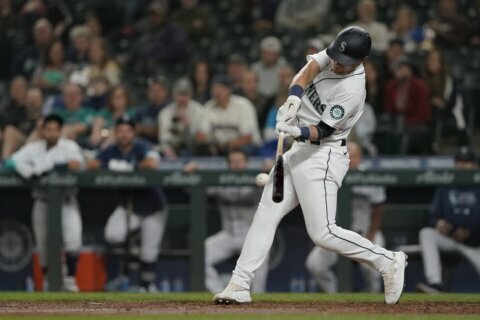 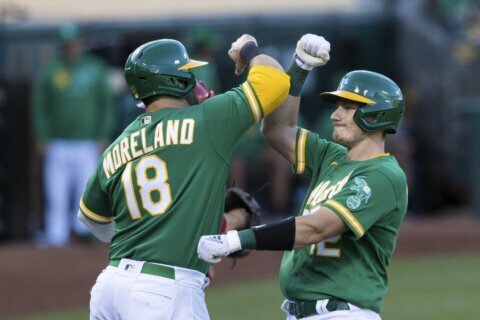