CLEVELAND (AP) — The marquee pitching matchup met high expectations. And as usual, Gerrit Cole exceeded them for the Yankees.

Cole was one pitch better than Shane Bieber in a heavyweight matchup of two of baseball’s best and Rougned Odor and Aaron Hicks homered off Cleveland’s Cy Young winner in the fifth inning, giving New York a 2-1 win over the Indians on Saturday.

Cole (3-1) struck out 11 and allowed just three hits in seven innings — he retired the final 11 batters he faced — to beat Bieber (2-2) in a rematch of their meeting in last year’s playoffs. Cole’s 50 strikeouts in his first five starts are the most for any pitcher in New York’s storied history.

“He was terrific in obviously a game where we needed him to be really, really good,” Boone said. “Really strong outing by our ace.”

The 25-year-old right-hander allowed just three hits, but two were homers while throwing a career-high 119 pitches.

“I thought he pitched his heart out,” Indians manager Terry Francona said. “He gave up two solo homers in the fifth, one on the fastball he didn’t locate, another one on a changeup. That was pretty good hitting. But I mean, he fought his command at times, especially early, but he competed so much and golly, that was a pretty damn good effort.”

After Cole was pulled following his 111th pitch, Justin Wilson got two outs in the eighth. With closer Aroldis Chapman unavailable after pitching three times in four days, Jonathan Loaisiga came on and finished up for his first career save.

New York’s bullpen has pitched 9 1/3 scoreless innings in the series.

The Yankees won their third straight in the four-game series after stumbling into Progressive Field with the AL’s worst record.

Two of the game’s premiere right-handers, Cole and Bieber traded pitch for pitch, strike for strike and strikeout for strikeout over seven innings.

Boone didn’t detect any extra fire in Cole even though he was facing Bieber.

“He’s locked in on the days he’s not pitching,” Boone said.

With the two All-Stars on top of their games, one run might have been enough and the Indians pushed one across in the fourth on Eddie Rosario’s soft RBI single.

Rosario’s hit scored José Ramírez, who tripled off Cole and nearly had a home run if not for right fielder Aaron Judge leaping at the wall and knocking his deep drive back onto the field.

“It was supposed to be a back-door curveball, left it up and it kind of fluttered,” Cole said. “Jose was all over it, maybe got under it just a tick and I was thankful Aaron was able to pull it back in and we were able to minimize after that.”

After striking out in his first at-bat, Hicks led off the fifth by driving a 1-2 pitch over the wall in right-center for his second homer in two days and third this season to tie it 1-1.

Bieber struck out the next two batters before Odor, who hit a tiebreaking, two-run single in the series opener and one of four Yankees homers on Friday night, sent a pitch 426 feet into the center-field bullpen.

“Frustrating,” Bieber said of the homers. “It’s not what you want to do. That is not the way you want to execute a game plan or just finish a game. Anytime you get a lead, you obviously don’t plan on giving it up.”

Bieber was hoping to avoid the same fate as his matchup with Cole last September, when the Yankees battered the eventual Cy Young winner in Game 1 of the wild-card round opener for seven runs in 4 2/3 innings as New York won 12-3.

That outing stuck with Bieber over the winter, fueling him.

“A sour taste,” he said Friday.

New York pitchers have recorded 217 strikeouts, the club’s most in franchise history through 20 games. The Yankees surpassed the 214 set by the 2018 club.

The two homers hit by Yankees slugger Giancarlo Stanton on Friday had respective exit velocities of 118 mph and 115.7 mph. He’s the first player n the Statcast era (since 2015) to record to multiple home runs with velocities of at least 115 mph in the same game.

Exit velocity has become a trendy stat, and Francona understands why fans are fascinated in it. He said it’s not indicative of who may be “the most complete hitter” and mentioned DJ LeMahieu, Ramirez and José Altuve as examples of players who hit the ball hard to all fields.

“It certainly isn’t the end all to be all,” he said. 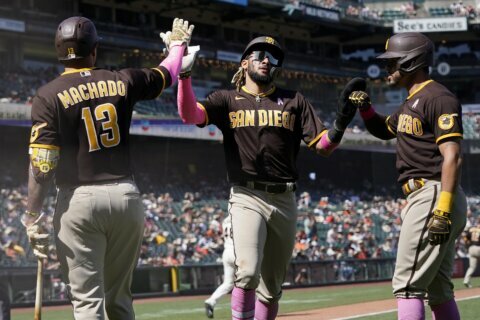