OAKLAND, Calif. (AP) — Ramón Laureano thought there was something in the air. He smelled victory.

“It’s like the Bay Area wind. It just smells like you’re going to win,” Laureano said Wednesday after the Oakland Athletics extended their winning streak to 11 with a 10th-inning rally fueled by two errors for a 13-12 victory over the Minnesota Twins.

“It’s just baseball and it’s hard to understand,” Laureano said. “We were still loose and having fun, so we knew we would win.”

Nelson Cruz had two home runs and four RBIs for the Twins, and Byron Buxton hit a two-run homer against Lou Trivino for a 12-10 lead in the 10th.

Alex Colomé (1-2) got the first two outs in the bottom half with the automatic runner on second, then walked Seth Brown and Elvis Andrus, loading the bases.

Mark Canha hit what should have been a game-ending grounder to second baseman Travis Blankenhorn, who entered as a pinch runner for Josh Donaldson in the 10th, but Blankenhorn allowed the ball to bounce off his glove for a run-scoring error.

Laureano hit a one-hopper to Arraez for what again should have been the final out. Arraez, who had moved to third from second base for the 10th, sailed his throw over first baseman Willians Astudillo as the tying and winning runs scored.

“Talk about a complete flip of the script,” A’s manager Bob Melvin said. “It felt like the game would end in some unorthodox way, like it was the whole game.”

Oakland started the season 0-6, split its next two games, then went on the 11-game winning streak, the longest in the major leagues since the A’s won 11 in a row from May May 16-27, 2019. No other team had lost its first six games and have an 11-game winning streak later that season, STATS said.

Minnesota was swept in the three-game series, the first time the Twins were swept this season.

“I wish we could be talking about game-saving plays,” Twins manager Rocco Baldelli said. “And Taylor Rogers really stepped up for us. He was impressive.”

Donaldson had four hits, including a home run, and is hitting .556 (10 for 18) since coming off the injured list. He’s reached in 18 of his last 31 plate appearances against his former club.

Matt Chapman tied the score 10-10 with a sacrifice fly in the ninth off Colomé, who blew a save for the third time.

Matt Olson homered twice and had three RBIs for the A’s, who allowed more runs than they had in seven previous games combined. Jed Lowrie doubled twice and drove in two runs.

“I could not set the tone,” Maeda said through an interpreter. “If I had done that, we would have gotten that W.”

“That was fun to watch,” Montas said. “It was really cool.”

The A’s are 34-16 against the Twins since the beginning of the 2013 season. The Twins .320 winning percentage is their second-lowest to any team during that span (they are .304 against the New York Yankees).

Twins: INF Miguel Sanó has a strained hamstring. “When he mentions that he’s unsure if he can go, and having trouble moving, I get a little concerned that it’s more than just a very minor strain,” Baldelli said. Sanó is to be evaluated before Friday’s game at home against the Pirates.

A’s: RHP Mike Fiers (lumbar strain) threw off a mound in Oakland on Tuesday and is on schedule to make his first start of the season in four or five days. “He feels good and has four more days to rest,” A’s manager Bob Melvin said. “We’ll see where we go with what we do. I haven’t got the point of sitting down with the front office to see what we do.”

Twins’ LHP J.A. Happ will be making his first start against the Pittsburgh Pirates in four years on Friday..

A’s LHP Cole Irvin will be making his seventh career start and his first against the Baltimore Orioles on Friday. 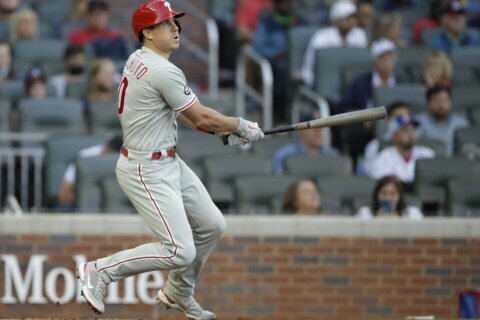