Nate Lowe did notice a distinct difference about his first spring training in Arizona, now that the young first baseman is in camp with the Texas Rangers.

“There’s no grains in the green, the ball doesn’t really hold the fairway all that well,” Lowe said Wednesday. “An extra 10% on your long irons … that’s something that I had to factor into my game.”

Lowe then chuckled, and made it clear he was just joking. His focus isn’t on the golf course, but rather trying to become a starter for the rebuilding Rangers, who viewed him as an upgrade at first base when they acquired him from Tampa Bay in December.

“We’ve been kind of targeting him for a while,” manager Chris Woodward said during a Zoom call from the team’s spring training facility in Surprise, Arizona. “He does a lot of the things that we want out of our hitters.”

Even with only 60 games in the pandemic-shortened season last summer, seven different players started games at first base for the Rangers. Ronald Guzman’s 23 starts were the most, but the elite 6-foot-5 defender with potential for big pop in his bat was inconsistent at the plate for the third year in a row.

Texas got the 25-year-old Lowe, who has appeared in only 71 big league games the past two seasons, in a six-player trade of prospects.

That deal went down while Guzman, who is at spring training out of minor league options, was playing in the Dominican winter league. A .230 hitter in 236 games for the Rangers, he hit .360 with five homers, 13 RBIs and 17 walks in 111 at-bats and the league MVP in his 30 winter games.

While the Rangers likely don’t have room for two left-handed hitting first basemen, there could be ways to keep both on the roster if they perform this spring training. Lowe, who throws right-handed, could also play some at third base, another unsettled position for Texas. But he is still at first for now, starting Wednesday’s spring training game there while Guzman got his first start in left field.

“Versatility is never a bad option, so it’s something that we’ll keep on the back burner,” Lowe said. “And if it’s something that is going to help the team win, then we’ll work more at it. But I’ve got to work on my craft at first, and figure it out from there.”

Lowe hit .224 with four homers and 11 RBIs in 21 games last season for the Rays, when his only postseason appearance was in the wild card series. He has a .251 average with 11 homers and 30 RBIs in his two big league seasons.

Woodward has been impressed watching Lowe during batting practice on the field and in the cages. There was also the double down the line he hit on a 3-1 changeup in an early spring game because of the ability to adjust his swing.

“Just the calmness, the swing itself is very simple with really good moves,” Woodward said. “It shows me that there’s going to be some consistency there in controlling the strike zone. He’s got a ton of power to move the ball, he’s got a ton of speed to the ball in his swing. … There’s a calmness about him. He doesn’t get too high, too low. He just kind of goes through every day.” 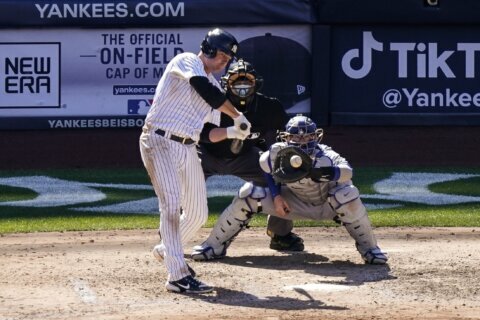 Snell expected to start as Padres host the Dodgers