Easy does it: MLB pitchers prepare for usual 162-game grind

PHOENIX (AP) — The sport of baseball, much like the rest of the world, is craving normalcy after a full…
Listen now to WTOP News WTOP.com | Alexa | Google Home | WTOP App | 103.5 FM

PHOENIX (AP) — The sport of baseball, much like the rest of the world, is craving normalcy after a full year of disruptions caused by the pandemic.

So the familiar feel of February spring training has pitchers eager to unleash fastballs, spin a few breaking balls and get ready for the 162-game long haul.

But the message from coaches and executives is clear: No need to rush.

“Spring training is 50 days long,” Seattle Mariners manager Scott Servais said. “To put that in perspective, our season last year was 66 days long. So we have time.”

As of Thursday, almost all 30 teams had started workouts for pitchers and catchers. Now organizations are working on how to manage their pitchers’ workloads after most threw less than half of their usual innings in the pandemic-shortened 2020 season.

Pitch counts or innings limits are hardly new concepts. Organizations do everything in their power to protect their pitchers, especially elite prospects. The bump in workload from 60 games to 162 just provides another variable to consider.

Teams are evaluating all kinds of strategies — including six-man starting rotations in some cases — to make sure they don’t overtax arms.

Nationals GM Mike Rizzo said those pitchers know how to listen to their bodies and prepare. But young pitchers — many of whom didn’t throw many innings last season — will have to be watched closely.

“We’re going to have to take that into consideration,” Rizzo said. “The depth in your organization is really going to come to the forefront, maybe more than ever before this season, because of the lack of innings logged last year by almost all of our pitchers.”

Caution is widespread. But some pitchers feel that the extra rest time will actually be beneficial.

Mets right-hander Marcus Stroman hasn’t thrown a competitive pitch since 2019 — he injured his left calf ramping up for the 2020 season and then opted out of the season entirely on Aug. 10 over coronavirus concerns.

Stroman said he sees the layoff as a benefit, giving the 5-foot-7 pitcher a chance to fine-tune his conditioning.

“It wasn’t like I was just hanging out,” Stroman said. “I was training daily, getting ready for whenever I was going to go out there next.”

“I never have to get ready, because I stay ready,” he added. “I’m ready to rock. I’m ready to go out there for 200-plus innings like I am every single year.”

Colorado Rockies manager Bud Black said he’d be monitoring the health of his pitchers, but the team can’t be afraid to put its best on the mound.

“I still think that a team that has reliable starting pitchers, if your best five guys take the ball each and every day, that gives you the best chance to win over the long haul of 162 games,” Black said. “We’re going to try to do that. We’re going to try to be a very confident and capable pitching staff that logs innings.”

MLB made some slight tweaks to its spring training schedule this spring, eliminating split-squad games and condensing travel in Florida.

That means there probably won’t be quite as many innings available in games.

Cardinals manager Mike Shildt and Diamondbacks GM Mike Hazen were among those who said playing some intrasquad games on the back fields during spring will be important for deciding roles for the bullpen and making sure pitchers get enough work.

“I was all for this schedule, I thought it was logical,” Shildt said. “But when you look at the depth of our pitching staff, who is going to start and who is going to relieve, there are a lot of guys in that reliever bucket that need to get innings.”

Philadelphia Phillies two-time All-Star catcher J.T. Realmuto has a small fracture in his right thumb and will be evaluated again in two weeks.

Realmuto was injured while blocking a pitch six days ago. He practiced on the first day of spring training Wednesday but an MRI later revealed the break. His hand will be immobilized but it’s possible he’ll still catch pitchers during bullpen sessions.

The Blue Jays expect to split the home portion of this year’s regular-schedule among their spring training complex in Dunedin, Florida, their Triple-A ballpark in Buffalo, New York, and the Rogers Center in Toronto.

Toronto will play the first two homestands of the season in Dunedin because of Canadian government restrictions during the pandemic.

Team President Mark Shapiro said a return to Buffalo is a likely option in June because of the heat and humidity in Florida. He hopes for games in Toronto at some point during the summer. 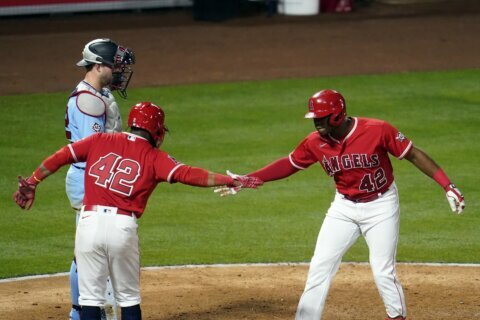 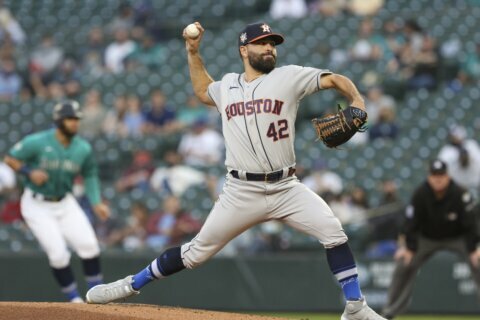 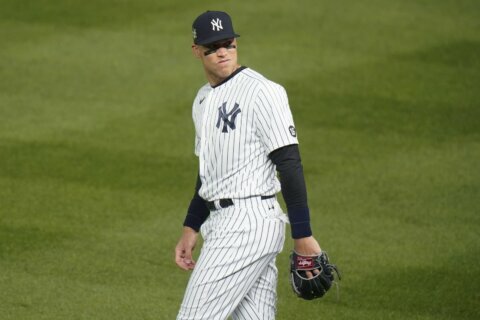