Chicago came into the series on the best surge in the majors, having won or split 10 straight series. The NL Central leaders let a late lead get away Wednesday night for a 6-5, 10-inning loss.
Listen now to WTOP News WTOP.com | Alexa | Google Home | WTOP App | 103.5 FM
(1/8) CINCINNATI (AP) — Eugenio Suarez singled home the go-ahead run during a fifth-inning downpour and added another RBI single Thursday night as the Cincinnati Reds pulled away to a 4-2 victory that slowed the Chicago Cubs’ momentum.

Chicago came into the series on the best surge in the majors, having won or split 10 straight series. The NL Central leaders let a late lead get away Wednesday night for a 6-5, 10-inning loss. This one slipped away as the rain intensified in the bottom of the fifth inning.

Jose Quintana (4-3) gave up Jose Peraza’s solo homer with one out, his first since April 26. After a pair of singles, Quintana threw back-to-back wild pitches that let in a run with two outs. Suarez’s single made it 3-2 . He added another RBI single in the seventh.

Luis Castillo (5-1) gave up two runs on two hits and a walk, all in the first inning. The Cubs got a break when Wilson Contreras’ grounder down the line hit the front edge of third base and caromed away from Suarez for a two-run double. Raisel Iglesias retired the side in the ninth for his ninth save in 11 chances.

The umpires called for the tarp after Kyle Schwarber lined out to start the sixth inning. Neither starter returned after a one-hour, 51-minute delay.

Kris Bryant walked in his first plate appearance, extending his career-best streak to 25 games reaching base safely. It’s the longest streak by a Cub since Ben Zobrist also reached in 25 straight games in 2017.

Javier Baez doubled and singled, extending his hitting streak to a career-high 14 games. It’s the longest by a Cub since Anthony Rizzo’s identical streak in 2017.

Catcher Victor Caratini returned from the 10-day injury list and Taylor Davis was optioned to Triple-A Iowa. Caratini broke a bone in his left hand during a swing on April 11 and had surgery. He started at first base for Chicago and went 0 for 3 with a pair of strikeouts.

Cubs: Rizzo hit pregame again and reported his back was much better. He was out of the lineup for a fourth straight game. Manager Joe Maddon expects him back during a weekend series in Washington.

Reds: 2B Scooter Gennett expects to start on-field activities later this month. He suffered a groin injury during spring training. There’s no estimate when he might be able to resume playing.

Reds: Anthony DeSclafani (2-1) starts a series against the Dodgers, who start left-hander Rich Hill (0-1). The Dodgers are 33-22 at Great American Ball Park, the second-best winning percentage by an opponent behind the Mets. 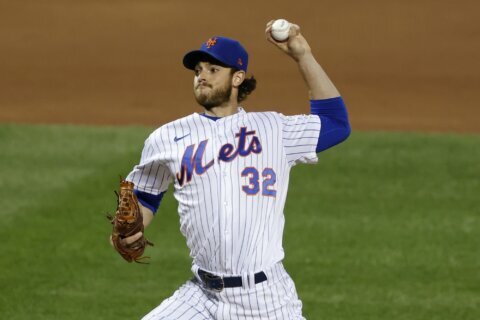 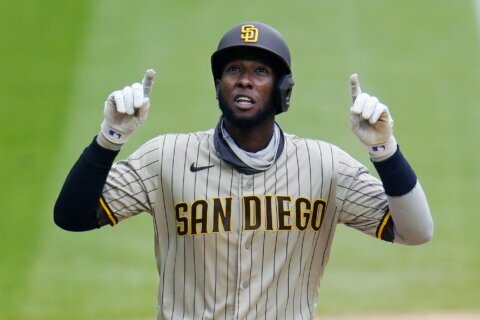