Is free agent spending for Harper, Machado the new ‘Moneyball’?

WASHINGTON — Whatever you think of the stagnating MLB free agent market and its implications toward potential labor unrest when the next collective bargaining agreement rolls around, there are two free agents that clearly won’t have any trouble getting some kind of offer: Bryce Harper and Manny Machado.

But just a couple years after overtures about a potential $400+ million deal for Harper, the reality appears much starker, with reportedly only a few teams even seriously discussing either player.

While there’s been plenty of hand-wringing around the sport about how this dynamic came to exist, there might be a more interesting question: Has the common perception of blockbuster free agent spending become so devalued that players such as Harper and Machado are actually undervalued right now? And, as a corollary, might spending on them be the most effective way to compete?

Baseball is awash in money, producing more revenue than ever before despite some troubling attendance numbers. Big-market clubs, small-market clubs — everyone is making a lot of money. Every team can afford the type of 10-year, ~$325 million contract being discussed for these players. This is hardly the first place to say it, but let it be said once again, lest there be any doubt: All 30 Major League clubs can afford such a contract.

Adding a player of Harper’s or Machado’s caliber is the quickest way to improve your team and increase your win total next season and in the years to come. A 10-year deal carries a high amount of risk, especially with all contracts in baseball being guaranteed, and the particularly unsightly back ends of recent 10-year deals to Albert Pujols and Alex Rodriguez are enough to make even the most freewheeling GMs skittish. But, as we know, Harper and Machado are not really comparable to those players.

A win on the free agent market is commonly valued around $10 million, and FanGraphs estimates it at $11.7 million for 2019. That means, conservatively, over the life of a $10-year, 325 million contract, a player would need to generate a little less than 28 WAR, or less than half of what both Pujols and Rodriguez did to justify their contract on the field.

There is no guarantee that Harper and Machado will post those numbers, but they are the two players available on the open market right now most likely to do so. Any team can have them for nothing more than money — no prospects, or newly tradable draft picks, or international bonus slot cash.

For the second straight offseason, a good number of MLB teams are sitting out free agency entirely. There seems to be an accepted wisdom around the game that if you don’t intend to compete immediately, you might as well tank your season and save as much money as possible. While this may make some measure of sense in a vacuum, it makes for a terrible on-field product that drives fans away. The entirety of that drop in attendance last year was essentially a result of the 10 worst teams in the game.

the 20 best teams saw an aggregate attendance increase of 1.8 percent from 2017

The concept that losing isn’t fun to watch is no revelation, but the severity of the impact on the business might be. Complete teardowns aren’t the only way to rebuild. You can still try to compete year in and year out while trying to build a more viable championship contender. Between competitive stretches at either end of the 16 years from 1999 to 2014, the Oakland A’s never won fewer than 74 games.

I mention the A’s because the oft-misunderstood concepts of “Moneyball,” written about the early stretch of that era of Oakland baseball mentioned above, have been used to excuse some of this penny-pinching across the league. The primary contrast was between the A’s and Yankees, and how much less the former spent per win than the latter. It’s certainly better to pay less per win. But the A’s were winning lots of games, a perennial playoff contender. The math changes when teams aren’t even trying to compete.

At its core, “Moneyball” — both as a book, and as the general concept — is about understanding markets, finding inefficiencies and exploiting them. On-base percentage was a focus in the book, because it was an undervalued asset of the moment. But nothing about the nature of OBP itself inherently had anything to do with it, only the way in which it was misunderstood.

Teams have continued to pursue new market inefficiencies on the field in the intervening years. That has culminated most recently in the increased emphasis on limiting starting pitchers’ exposure to seeing the same hitters too many times, both with deeper bullpens and even with the idea of relievers starting games for an inning.

But as more and more teams treat the luxury tax as a prohibitive salary cap and others shy away from spending much of anything in free agency, have we come full circle on the actual market inefficiencies exposed in “Moneyball?” Could the new market inefficiency be … spending money?

The Nationals have been one of the few teams to continue to attack free agency, plucking starting pitchers Patrick Corbin and Anibal Sanchez to fortify their rotation; catcher Kurt Suzuki, reliever Trevor Rosenthal and bench bat Matt Adams, while patching other holes through trades. And yet, they remain one of the only teams publicly linked to Harper, who would only further solidify their status as division favorites for 2019 and years to come.

The price is big, as is the risk. But right now, there are two generational players available for the next decade to whoever wants them. If most everyone has convinced themselves that the risk of such a contract isn’t worth it, perhaps the best way to play Moneyball in 2019 is to jump in and spend big. 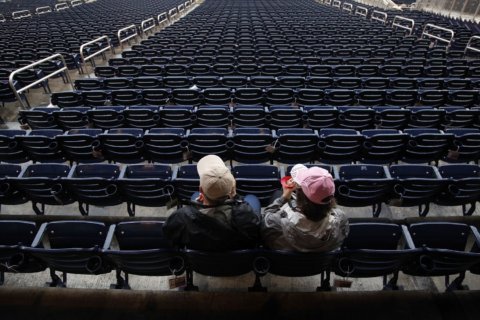 Is tanking ruining the game for fans?