BEIRUT (AP) — Lebanese security forces, accompanied by an investigative judge, raided the country’s Central Bank on Tuesday in a divisive investigation against the bank’s embattled governor.

Also in March, in an initiative by Germany, France, and Luxembourg, the European Union froze $130 million worth of Lebanese assets belonging to five unnamed Lebanese. They accused the suspects of embezzling over $330 million and 5 million euros ($5.5 million) respectively, between 2002 and 2021. It is widely believed that Riad Salameh and his brother Raja are among the five.

Lebanon is grappling with a staggering economic crisis that has pushed over three-quarters of its population into poverty.

Many hold Salameh responsible for the crisis, citing policies that drove up national debt and caused the Lebanese pound to lose 90% of its value against the dollar. The 71 year-old Central Bank governor, who has held the post for the past three decades, still enjoys the backing of most Lebanese political parties.

On Tuesday, the investigative judge arrived at the Central Bank headquarters in Beirut with Lebanese state security personnel, apparently trying to find Salameh.

Aoun told the press after leaving the premises that she did not find Salameh and was unable to look for him in the building’s offices and storage rooms. “We immediately received a judicial order (to leave),” she said.

State security forces earlier Tuesday raided Salameh’s home, but he was not there.

Caretaker Prime Minister Najib Mikati condemned the raid in a statement, calling it a “brash” move for a sensitive case in the troubled country.

“What is required is to solve this case with a prior political agreement on a Central Bank governor, and then take the appropriate legal course,” Mikati said.

Aoun’s monthslong investigation into Salameh has divided the country. In January, she froze his assets as a “precautionary measure, ” after he did not show up for questioning in a lawsuit filed by a Lebanese anti-corruption group.

She has also charged the governor’s brother, Raja Salameh, with involvement in the formation of three illusive companies in France alongside Ukrainian citizen Anna Kosakova to purchase real estate worth nearly $12 million there. Raja was detained in March and released in May on record bail worth $3.7 million.

This story has been corrected to show that the bail amount for the governor’s brother was $3.7 million, not billion. 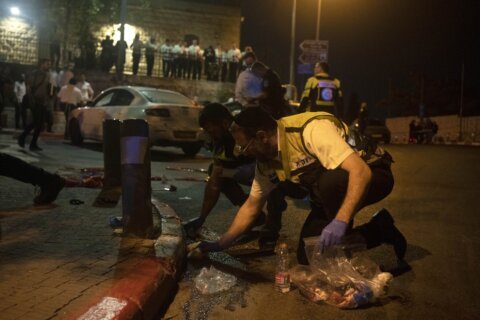