Israeli media said four members of a police counter-terrorism unit of the Israeli police were wounded, one of them seriously. The troops came under fire as they attempted to arrest suspected militants in the northern West Bank.

Tensions have soared in recent days after Palestinian assailants killed 11 Israelis in separate attacks across the country. Saturday marks the start of Ramadan, a month of dawn-to-dusk fasting, prayer and religious devotion for hundreds of millions of Muslims around the world. In the Israeli-Palestinian conflict, Ramadan has often been a period of increased friction and confrontation.

The Israeli police said the three militants were members of a cell that was involved in recent attacks against Israeli forces and were planning another attack that was thwarted during early Saturday’s joint operation with the military and intelligence.

Live videos by witnesses on social media showed a crowed of Palestinians inspecting the scene of the clashes near the city of Jenin after the Israeli troops withdrew. The street was covered with blood stains and the men chanted slogans calling for revenge.

Palestine TV reported that Israeli forces seized the bodies of the militants.

In response to the recent Palestinian attacks, more Israeli forces were sent to the West Bank in recent days for increased searches, patrols and arrest raids.

With Saturdays deaths, seven Palestinians were killed over three days, including two in a gun battle Thursday and one after he stabbed and wounded an Israeli on a bus in the West Bank.

On Friday, a Palestinian man was killed by troops in the West Bank city of Hebron, during clashes that erupted after mosque prayers. The Israeli military said its forces shot a Palestinian who threw a firebomb at them.

Several hundred Jewish settlers live under heavy military protection in the heart of Hebron, a city of more than 200,000 Palestinians and home to a major holy site sacred to Jews and Muslims.

Also Friday, the Palestinian Red Crescent emergency service said 36 Palestinians were hurt in weekly confrontations with Israeli forces elsewhere in the West Bank. Protesters often throw rocks and firebombs at Israeli troops who use tear gas, rubber-bullets and live fire. Thirty-three of the injured were struck by rubber bullets and three by live rounds Friday, the Red Crescent said.

At the Al-Aqsa mosque in east Jerusalem, the third holiest site in Islam, authorities said more than 30,000 people attended Friday prayers on the eve of Ramadan. There were no reports of protests or violence.

The hilltop on which the mosque is located is the holiest site for Jews, who refer to it as the Temple Mount, and it has been a frequent flashpoint in the century-old conflict.

Israeli, Palestinian and Jordanian leaders have held a flurry of talks in recent weeks, and Israel has made a series of goodwill gestures, all aimed at calming tensions ahead of Ramadan.

They hope to avoid a repeat of last year, when protests and clashes in Jerusalem during Ramadan ignited an 11-day Gaza war and Jewish-Arab violence in Israel’s mixed cities. 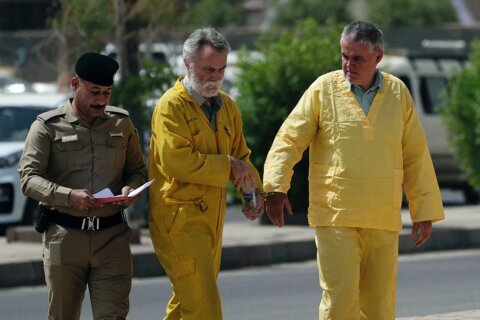