CAIRO (AP) — More than 90 people in an overcrowded boat drowned in the Mediterranean Sea, a prominent humanitarian group said, in the latest tragedy involving migrants departing from North Africa to seek a better life in Europe.

Doctors Without Borders said late Saturday the migrants were on a vessel that left Libya last week. It was unclear exactly when the boat ran into trouble, said Juan Matias Gil, the group’s head of mission.

The group, also known by its French acronym MSF, said an oil tanker rescued four migrants early Saturday in international waters. The survivors reported that they were on the boat along with about 100 other migrants, it said.

MSF said the tanker did not respond to its calls not to return the migrants to Libya, where “they will almost certainly face detention, abuse and ill-treatment.”

The group urged Italy and Malta to “assign a place of safety for the survivors before it is too late.” It also called for The European Union border protection agency Frontex and other EU agencies to reveal the details of the incident.

Migrants regularly attempt to cross the Mediterranean from the North African nation in a desperate attempt to reach European shores. The country has emerged as the dominant transit point for migrants fleeing war and poverty in Africa and the Middle East.

Human traffickers in recent years have benefited from the chaos in Libya, smuggling in migrants across the oil-rich country’s lengthy borders with six nations. The migrants are then typically packed into ill-equipped rubber boats and set off on risky sea voyages.

Around 300 migrants died or were presumed dead along the Central Mediterranean route between Jan. 1 and March 28, according to International Organization for Migration. About 3,100 were intercepted and taken back to Libya.

Once back in Libya, the migrants are typically taken to government-run detention centers rife with abuse and ill-treatment.

In 2021, at least 32,425 migrants were intercepted and returned to Libya. At least 1,553 are presumed to have drowned last year, according to IOM.

Investigators commissioned by the United Nations’ top human rights body found evidence of possible crimes against humanity committed in Libya against migrants detained in the country. 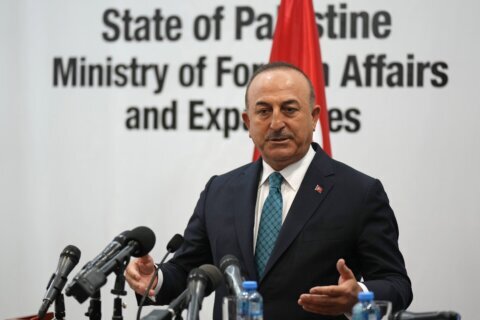