The globalized city-state appears to be in the midst of a boom season, spurred on by one of the world’s highest vaccination rates and government steps to lure businesses and de-escalate tensions with regional rivals.
Listen now to WTOP News WTOP.com | Alexa | Google Home | WTOP App | 103.5 FM

DUBAI, United Arab Emirates (AP) — Nations around the world are lurching into lockdown, steeling themselves for a brutal surge as the omicron variant spreads like wildfire.

But in Dubai, Donna Sese is bracing for a very different surge: countless restaurant bookings and meter-long drink bills.

“We’re back and busy like the way things used to be,” said Sese, manager of the Yalumba restaurant at the five-star Le Meridien hotel, where devotees of Dubai’s Friday brunch pay $250 for lavish spreads with free-flowing Clicquot Champagne.

The globalized city-state appears to be in the midst of a boom season, spurred on by one of the world’s highest vaccination rates and government steps to lure businesses and de-escalate tensions with regional rivals.

Maskless debauchery has returned to dance floors. Brunch-goers are drinking with abandon. Home-buyers are flooding the market. Tourists are snapping up hotel suites. Expat millionaires are moving to the emirate. Coronavirus infections, although now making a comeback, remain below past peaks.

The Dubai government did not respond to request for comment.

It’s déjà vu for those recalling the rush of December last year in Dubai, when the city courted tourists and influencers fleeing coronavirus lockdowns and wintry weather elsewhere. The open-door policy let revelers sate their pent-up desire to go out on New Year’s Eve but infections soon rocketed to unseen heights, and hospitals filled up with COVID-19 patients.

A year later, mass vaccination has left Dubai feeling like it’s off the hook. There have been vanishingly few virus hospitalizations and deaths — even as the global spread of omicron threatens a new surge. Daily infections surpassed 1,000 on Thursday after lows of under 100 for weeks.

While many Western countries have seen inoculation rates plateau, the UAE reports 99% of all of those eligible for vaccines — anyone over 12 — has received at least one dose.

Some have received five.

In the global vaccine scramble, the UAE relied initially on a shot made by Sinopharm, a state-backed Chinese company. Even as the nation’s vaccination rate soared, infections rose — as did concerns over Sinopharm’s insufficient antibody response.

Now, Sinopharm is no longer an option in Dubai. Those who received both doses, including the emirate’s legions of low-paid foreign laborers, also have opted for double vaccination with Pfizer-BioNTech. The government offers Pfizer boosters to all adults.

Months of trepidation have given way to unburdened excitement. Encouraged by widespread inoculation and record-low mortgage rates, more properties were sold in Dubai in November than in any other month in the last eight years, according to website Property Finder.

Sales prices have surged past pre-pandemic levels. Until June, prices were climbing 2.5% month on month, with wild appreciations in the luxury segment.

“You can go to restaurants. There’s no debate about remote working. This is not the case in Europe where it’s still locking down,” said Christophe De Rassenfosse, the chief product officer of Property Finder, about why he moved his family from Brussels to Dubai in October. “You don’t necessarily have a huge percentage of elderly people which occupies the hospitals.”

The government has promoted plans to make the sheikhdom more attractive to foreign investors and visitors, with new 10-year visas, retirement and freelance options and reforms to the country’s Islamic legal code.

In its latest move as competition heats up with neighboring Saudi Arabia, the UAE will change its work week from Sunday-Thursday to Monday-Friday in January to align with the West.

The rebound is apparent in the city’s full hotels, clogged roads and raucous nightclubs.

Hotel occupancy in Dubai exceeded 90% in mid-November, according to data firm STR. Long-haul carrier Emirates estimated over 1.1 million passengers would squeeze through its Dubai terminal ahead of the holidays.

Traffic during the first week of December surpassed 2019 levels, according to navigation company TomTom. Taxis have been missing from many street corners, with fleet owners that downsized operations during the pandemic citing shortages amid “unprecedented” demand.

Overall sales of alcohol by volume in the UAE rose to 117.5 million liters (31 million gallons) this year, up some 7.8% sold the year before, according to market research firm Euromonitor.

The growth has even extended to business with the UAE’s long-time rivals — Turkey and Iran.

Politics had poisoned trade between the powerhouses in past years. But in a recent flurry of diplomacy across the Middle East, UAE’s de factor leader met Turkey’s president in Ankara, and a top Emirati national security advisor visited Tehran.

From March to September 2021, Iran’s imports from the UAE spiked 70% to $5.4 billion, according to Iranian government figures. Emirati imports will hit levels unseen since America imposed crushing sanctions on Iran in 2018 by the year’s end.

Trade between the UAE and Turkey also jumped over 100% to $7.2 billion during the first half of this year, reported the official Emirati WAM news agency.

Iranian and Turkish business leaders in Dubai say the détente has eased restrictions on their licenses and visas.

Turkish business expert Fatma Nilgun Emrem of Tamimi Consulting has been inundated with requests from Turkish beauty salons, retailers and restaurants seeking to set up shop in Dubai.

“The policies and perspectives of the UAE are changing,” she said.

Hossein Asrar Haghighi, board member of the Iran-UAE Business Council, similarly described “a relaxing” of trade regulations on Iranians and growing number of Iranian businessmen who secured the UAE’s 10-year golden visas.

“The combination of Dubai getting out of COVID, reduction of regional tensions and new moves to attract businesses, it’s a pretty good environment,” said Gregory Gause, a scholar of the region at Texas A&M University. “But Dubai doesn’t control what goes on around it.”

A collapse of ongoing talks in Vienna to revive Tehran’s nuclear deal may inflame Mideast tensions. When the world’s fair packs up and leaves Dubai next year, industries may suffer from overcapacity, warned James Swanston, an economist at Capital Economics.

And the rapid spread of omicron may soon spoil Dubai’s party.

But for now, optimism reigns.

“The money has returned,” said Saeed Zakari, a captain at Dubai’s creek who plies the Persian Gulf in a dhow packed with appliances bound for Iran. 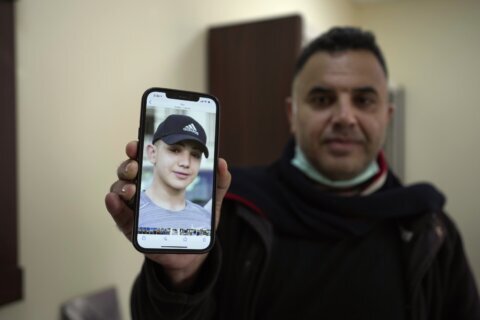