DUBAI, United Arab Emirates (AP) — The island kingdom of Bahrain announced plans Wednesday for over $30 billion in spending to spur investment and build up infrastructure over the next several years, promising to create five brand-new cities on man-made islands.

The project signals the government’s efforts to drive growth after the economic pain of the pandemic even as its fiscal picture remains shaky, with the country’s public debt rising 133% of its gross domestic product last year, according to the International Monetary Fund.

The statement did not offer details as to how the country would fund the massive undertaking, which involves 22 projects, including artificial islands that would boost the kingdom’s landmass by over 60%, a new causeway to Saudi Arabia to stimulate regional trade and a 100-kilometer (62-mile) metro system connecting all the country’s cities.

“Bahrain is emerging from the pandemic with a bold ambition that looks beyond economic recovery to a more prosperous future,” said Finance Minister Sheikh Salman bin Khalifa Al Khalifa.

Bahrain, like its neighbors, is pushing a so-called Vision 2030 to diversify its economy, even as oil continues to provide an estimated 75% of government revenue.

The oil-producing country took on more debt to cope with the economic shock of the pandemic, which pushed oil prices to historic lows.

Last month, Bahrain said it was postponing its zero-deficit target to 2024 and announced other measures to rein in its debt levels, reducing expenditures and increasing its sales tax to 10% from 5%. Wealthier Gulf Arab countries, which in 2018 offered the kingdom a $10 billion bail-out, expressed support for its budget plans.

As ties warm, Syria to host a 2024 Arab energy conference 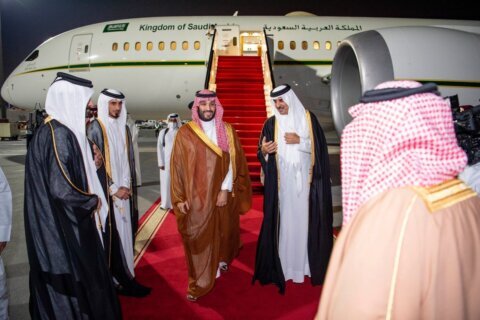