Coronavirus News: Fairfax Co. votes to increase substitute teacher pay | Is it time to get a COVID-19 booster? Which one? | Local cases of COVID-19 | How many in DC region are vaccinated?
Home » Middle East News » Jordanian king's properties undercut…

JERUSALEM (AP) — Jordan’s King Abdullah II was meeting with the World Bank president, asking for more financial support for his country’s battered economy, just around the time the news broke: A trove of leaked documents revealed the king had secretly bought more than a dozen luxury homes in the U.S. and Britain for over $100 million in the past decade.

Abdullah was one of scores of public figures identified as holders of hidden offshore accounts. But perhaps nowhere was there a more evident contradiction between the public man and the private one, for the king has carefully cultivated an image as a caring father of a struggling nation, and it turns out he has amassed an empire of luxury real estate.

“Nobody’s going to turn a blind eye to this,” said Dave Harden, a former senior official at the U.S. Agency for International Development who is now running for Congress as a Democrat in Maryland. He said even a perception of misspending could lead to calls for greater oversight of future American assistance to Jordan.

Abdullah was on a long list of world leaders, politicians, billionaires, celebrities, religious leaders and drug dealers who have been hiding their investments in mansions, exclusive beachfront property, yachts and other assets for the past quarter-century, according to a report Sunday by the International Consortium of Investigative Journalists.

The report, based on a review of nearly 12 million files obtained from 14 firms around the world, was dubbed the “Pandora Papers.” There were no allegations of illegal activity or misuse of international aid money.

Still, the report came at a delicate time for Abdullah. The country’s economy has struggled in recent years, and his leadership came under scrutiny earlier this year when his half-brother accused the “ruling class” of corruption. Seen by the West as a force of moderation and stability in the volatile Middle East, Abdullah relies on billions of dollars of international aid — a flow that could be disrupted if donors believe their assistance is being squandered.

Abdullah angrily denied any wrongdoing, saying the homes had been kept secret because of security concerns and were purchased with personal funds.

“Any allegations that link these private properties to public funds or assistance are baseless and deliberate attempts to distort facts,” a statement from the Royal Hashemite Court said Monday.

It called any such suggestions “defamatory and designed to target Jordan’s reputation as well as his majesty’s credibility.”

In the short term, Abdullah does not appear to face any threat at home. When his half-brother, Crown Prince Hamzah, leveled his accusations of corruption and incompetence last April, he was quickly placed under house arrest.

Hamzah has been seen in public just once since then and remains incommunicado. Two former top aides, meanwhile, have been sentenced to 15-year prison terms for incitement and sedition over their roles in an alleged plot with Hamzah.

In an apparent sign of concern, the Jordanian media, most of which is directly or indirectly controlled by the palace, made no mention of the Pandora Papers affair. Even independent Jordanian media outlets engage in self-censorship, avoiding criticism of the royal family and security forces.

Jordan’s economy has fallen onto hard times over the past decade, hit by an influx of hundreds of thousands of refugees fleeing war in neighboring Syria and, more recently, by the coronavirus pandemic.

According to the World Bank, Jordan’s economy contracted slightly last year, while unemployment spiked to 25%. The country of 10 million is divided between a small middle and upper class with close ties to the government, and impoverished masses living in city slums, outlying villages and refugee camps.

“When anyone lives in hardship, difficult conditions and extreme poverty, it is difficult to see their rulers living in prosperous conditions,” said Maisara Malas, a union activist who has joined antigovernment protests seeking lower taxes and an end to corruption.

Abdullah, who took power in 1999 after the death of his father, King Hussein, has sought to straddle these worlds by portraying himself as father figure.

He is careful not to flaunt his wealth. Though he spends lengthy periods overseas, he does so quietly, often at undisclosed locations.

He meets with powerful tribal leaders in Jordan’s hinterlands to underscore his local roots. Posters in government offices and on billboards often show the king wearing a red Arab headdress or military uniform.

Last year, his then-prime minister, Omar Razzaz, launched an effort to crack down on tax evasion, corruption and “smuggling money into tax havens.”

On Monday, the king paid a visit to tribal leaders and other dignitaries in Badia, a region south of the capital Amman, where he said Jordan was being threatened by destabilizing forces.

“There is a campaign against Jordan, and there are still those who want to sabotage and build suspicions,” he said. “There is nothing to hide.”

Labib Kamhawi, a Jordanian analyst, said that given the media blackout and lack of internet use among the poorest, he did not see any immediate threat to the king. But he said that as word of the scandal spread, it could be “very damaging” domestically.

But perhaps more troubling, he said, is that it could anger donor nations. According to Jordan’s official Petra News Agency, the country received some $5 billion in foreign aid last year, both in unrestricted budget assistance and specially earmarked grants. More than a quarter of that money came from the U.S. alone.

“It is bound to affect the ability of Jordan to solicit aid easily,” Kamhawi said.

As a strategic Western ally and with a peace agreement with Israel, Jordan remains too important to be abandoned by the international community. President Joe Biden this year called Abdullah a “loyal and decent friend.”

U.S. State Department spokesman Ned Price would not comment specifically on Abdullah’s real estate holdings but said: “When it comes to our assistance to Jordan, we have been helping to improve the lives of the Jordanian people for over six decades. We carefully conduct monitoring and evaluation of all of our assistance programs to ensure they’re implemented according to their intended purpose.”

Price said that American aid to Jordan is in the national security interest of the United States, because it helps the country secure its borders, promote stability and participate in countering the Islamic State group.

Harden, the former U.S. aid official, said it is a common concern in the profession that assistance ends up being misused and helping corrupt leaders instead of everyday people. He said to avoid that, money is often earmarked for specific development projects and tightly supervised.

He predicted a “serious review” of any unrestricted aid to Jordan but said he expects money to continue to flow to programs with tight safeguards. Even so, he said the disclosures in the Pandora Papers look bad for the king.

“It cuts against the core of what we are trying to achieve,” he said. 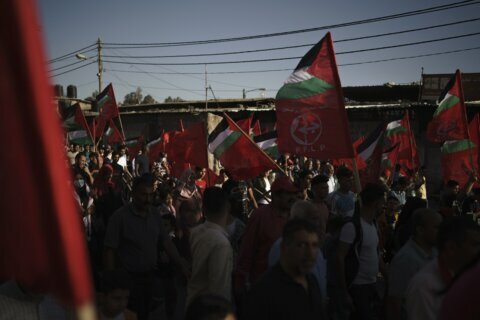