BEIRUT (AP) — The artist meticulously cuts small pieces of yellow and red glass, then lays them in a pattern to recreate the stained-glass windows that were the trademark of Beirut’s Sursock Museum, shattered in last year’s port explosion.

Conservators, hunched over with magnifying glasses, fill lines of paint loss caused by the explosion with their brushes and weave together tears thread by thread under microscope. Other workers delicately piece back together broken shards of ceramics.

“It has been very hard to see my work of 30 years on the ground, back to being sand … But it is important to rebuild the museum,” said Maya Hussaini, the artist who worked on the stained-glass windows during a major renovation at the museum that finished in 2015 and is back rebuilding them now,

“I had to go back to my archive to dig out my designs to bring it back to how it was,” she said.

Perched on the hills of the Achrafieh neighborhood hundreds of meters from the Beirut Port, the 60-year-old Sursock was the beating heart of Beirut’s creative scene. The country’s only modern art museum, it boasts a collection of Lebanese art dating back to the late 1800s.

It has long provided a rare public and free space for art, not even closing throughout Lebanon’s 1975-1990 civil war.

Restorers and artists have been working to revive that role after the museum was decimated by the Aug. 4, 2020 port explosion.

The explosion ripped through the three-story building, unhinging the doors, wrecking everything down to the fourth underground level. Windows shattered, including the stained-glass windows of its façade. The art collection was badly hit.

At least 57 of the 130 pieces on display were either broken or torn, including Dutch artist Kees Von Dongen’s portrait of Nicolas Sursock, after whom the museum is named. The nearby 19th-century landmark Sursock Palace, one of the most storied buildings in the Lebanese capital, was also wrecked in the blast.

The massive explosion, which devastated Beirut, also caused a gaping wound to the thriving creative scene for which the Mediterranean city had been famous. Many of the independent, small art spaces are in the cosmopolitan districts hardest hit by the blast.

A number of galleries and private studios were destroyed. Some, already suffering from a growing economic crisis, have shut down for good.

For the Sursock Museum, the blow was even harder because it had just finished in 2015 a nearly decade-long project of modernization and expansion.

“At the beginning we were overwhelmed with the reality and the extent of the damage.” said Zeina Arida, the museum’s director.

For three months, teams cleaned dust and chemical particles off everything in the museum. Then came the art restoration. Everything was restored in Beirut, except for the Nicolas Sursock portrait and two other pieces, flown to Paris for specialized treatment.

A year later, builders have installed windows, ceilings and doors and are now reinstalling dividers and lights.

There was broad and swift support to bring the museum back to life.

The museum raised nearly 80% of the estimated $3 million restoration budget through the French and Italian governments, the International Alliance for the Protection of Heritage in Conflict Areas, UNESCO, private donors and local groups.

It was a major feat for a country grappling with the explosion, a financial crisis and coronavirus restrictions.

The economic crisis has been a major hurdle.

“It really has been two years that were very stressful, and the kind of challenges we are facing are evolving,” said Arida. Before the blast, she had to reduce the museum’s working days to save money as the economy fell apart.

Since late 2019, banks have limited depositors’ access to dollar accounts and restricted withdrawals from national currency ones.

So, the museum raised funds abroad to be able to secure supplies and basic material. Management still had to figure out how to secure funds domestically. Just like the rest of the country, the museum is struggling to secure fuel for its air conditioners, necessary for storage areas and restoration workshops.

The museum aims to reopen in the spring of 2022, though the economic and security conditions remain unpredictable. In recent weeks, the museum has hosted concerts and dance shows in its garden.

For many artists, like other struggling professionals, the explosion was the final straw, pushing them to leave for opportunities abroad.

Arida said the exodus creates a new responsibility: the need for new programs and funds to retain those who stayed.

“We need to rebuild the whole sector. The museum without the other organizations, without… the surrounding heritage buildings would never be the same,” she said. 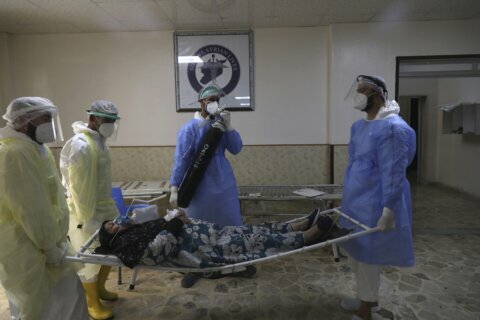