Palestinian held in Israel to be released amid hunger strike

JERUSALEM (AP) — A Palestinian man held by Israel without charges will be released from custody and transferred to a…
Listen now to WTOP News WTOP.com | Alexa | Google Home | WTOP App | 103.5 FM

JERUSALEM (AP) — A Palestinian man held by Israel without charges will be released from custody and transferred to a Palestinian hospital in the occupied West Bank after being on a hunger strike for more than two months, his supporters said Thursday.

Amjad al-Najjar, a spokesman for the Palestinian Prisoners Club, said Ghadanfar Abu Atwan, 28, will be released from an Israeli hospital in the “coming hours” and transferred to a hospital in Ramallah, where the Palestinian Authority is headquartered.

A lawyer for Abu Atwan had earlier said that his client’s condition had deteriorated in recent days and that he wanted to be transferred from Israel’s Kaplan Hospital.

Medical records dated July 7 and reviewed by The Associated Press show that Abu Atwan has gone through several periods where he refused to drink water or fluids with sugar, salt or vitamins.

The records described him as “noticeably weak, almost unable to speak” and unable to move his lower limbs.

The case has drawn renewed attention to “administrative detention,” a controversial Israeli policy in which it holds Palestinian suspects without charges for months at a time. The policy has drawn criticism from human rights groups.

He said Abu Atwan’s administrative detention was recently suspended by Israel’s Supreme Court due to his dire health condition. But the court’s ruling left him “sick and captive in the hospital,” Boulos said.

“His only demand today is that he be released immediately and return to his home free, or that he be transferred to a Palestinian hospital, so that he can complete his treatment there,” Boulos told the AP earlier Thursday.

Israel’s Shin Bet internal security service said Abu Atwan is a member of a Palestinian militant group but is no longer seen as a threat because of his health condition. It confirmed he was being transferred to the Palestinian Authority for treatment at a Palestinian hospital.

It added that if Abu Atwan is once again deemed a threat, “required actions” would be taken.

Under the administrative detention policy, Israel holds Palestinians without charges on suspicion of undisclosed security offenses. The detention orders are renewable and have generated stiff blowback from groups that allege the practice violates the right to due process.

The Palestinian Prisoners Club, an advocacy group that represents the thousands of Palestinians imprisoned by Israel, said Abu Atwan began his hunger strike May 5 in prison and was subject to abuse and assault. It alleged that he was then transferred to several prisons, beaten and sprayed with a substance that made it hard to breathe. 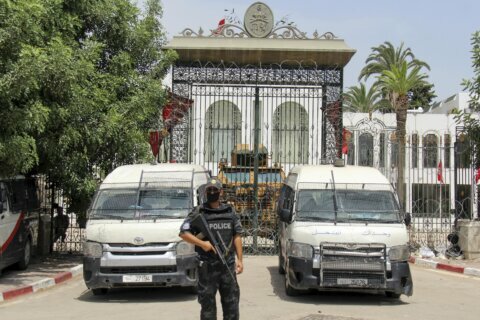