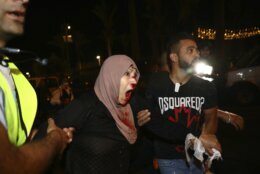 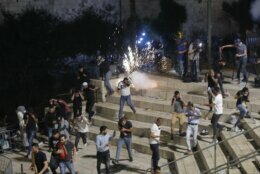 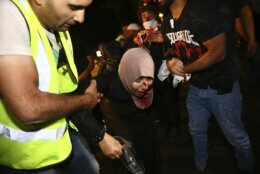 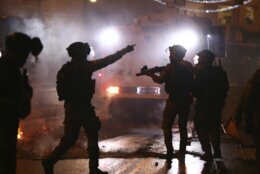 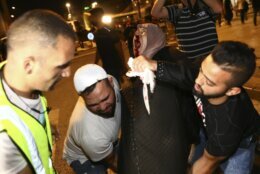 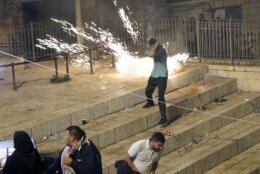 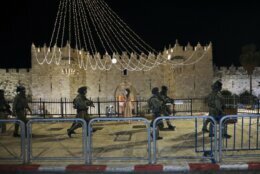 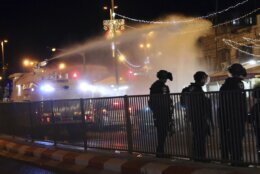 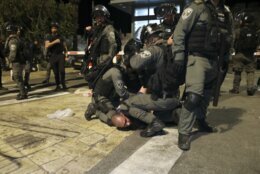 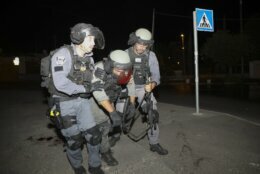 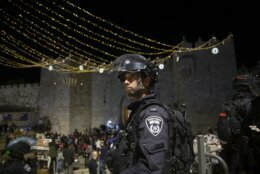 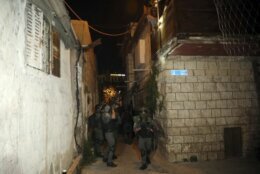 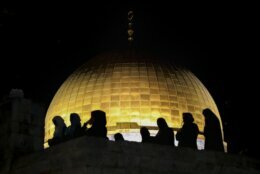 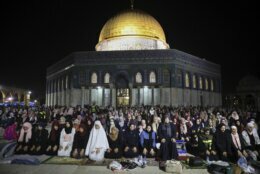 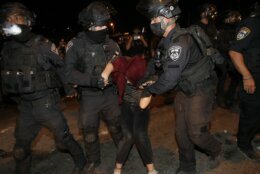 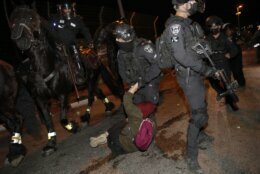 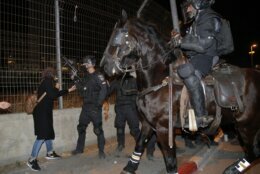 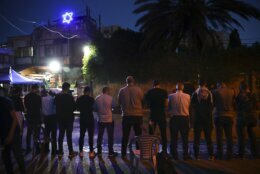 JERUSALEM (AP) — Israeli police on Saturday clashed with Palestinian protesters outside Jerusalem’s Old City during the holiest night of Ramadan in a show of force that threatened to deepen the holy city’s worst religious unrest in several years. Earlier, police blocked busloads of pilgrims headed to Jerusalem for prayer at Islam’s third holiest site.

Police defended their actions as security moves, but these were seen as provocations by Muslims who accuse Israel of threatening their freedom of worship. Competing claims to east Jerusalem, home to major shrines of Judaism, Islam and Christianity, lie at the heart of the Israeli-Palestinian conflict and have triggered serious violence in the past.

The unrest came a day after violence in which Palestinian medics said more than 200 Palestinians were wounded in clashes at the Al-Aqsa mosque compound and elsewhere in Jerusalem. Friday’s violence drew condemnations from Israel’s Arab allies and calls for calm from the United States and Europe and the United Nations. The Arab League scheduled an emergency meeting on Monday.

Early Sunday, the Israeli military said Palestinian militants in the Gaza Strip fired a rocket at the country’s south that fell in an open area. In response, aircraft struck a military post for Hamas, the militant group ruling the territory. There were no reports of casualties in either attack.

“The right to demonstrate will be respected but public disturbances will be met with force and zero tolerance. I call on everyone to act responsibly and with restraint,” Shabtai said.

Saturday night was “Laylat al-Qadr” or the “Night of Destiny,” the most sacred in the Muslim holy month of Ramadan. Islamic authorities estimated 90,000 people gathered for nighttime prayers at Al-Aqsa, the third-holiest site in Islam.

A large crowd of protesters chanted “God is great” outside the Old City’s Damascus Gate, and some pelted police with rocks and water bottles. Police patrols fired stun grenades as they moved through the area, and a police truck periodically fired a water cannon.

Palestinian medics said 64 Palestinians were wounded, mostly by rubber bullets, stun grenades or beatings, among them a woman whose face was bloodied. Eleven people were hospitalized, medics said.

One man with a small boy yelled at the police as they marched by. “You should be ashamed!” he said.

Earlier, police reported clashes in the Old City, near Al-Aqsa, and in the nearby east Jerusalem neighborhood of Sheikh Jarrah, where dozens of Palestinians are fighting attempts by Israeli settlers to evict them from their homes. Police reported several arrests, and said one officer was struck in the face with a rock.

Earlier Saturday, police stopped a convoy of buses that were filled with Arab citizens on the main highway heading to Jerusalem for Ramadan prayers. Israel’s public broadcaster Kan said police stopped the buses for a security check.

Muslims fast from dawn to dusk during Ramadan, and travelers, upset that they were stopped without explanation on a hot day, exited the buses and blocked the highway in protest. Kan showed footage of the protesters praying, chanting slogans and marching along the highway toward Jerusalem. The road was reopened several hours later.

Ibtasam Maraana, an Arab member of parliament, accused police of a “terrible attack” on freedom of religion. “Police: Remember that they are citizens, not enemies,” she wrote on Twitter.

The current wave of protests broke out at the beginning of Ramadan three weeks ago when Israel restricted gatherings at a popular meeting spot outside Jerusalem’s Old City. Israel removed the restrictions, briefly calming the situation, but protests have reignited in recent days over the threatened evictions in east Jerusalem, which is claimed by both sides in their decades-old conflict.

Other recent developments also contributed to the tense atmosphere, including the postponement of Palestinian elections, deadly violence in which a Palestinian teenager, two Palestinian gunmen and a young Israeli man were killed in separate incidents in the West Bank, and the election to Israel’s parliament of a far-right Jewish nationalist party.

One right-wing lawmaker, Itamar Ben-Gvir, briefly set up an outdoor “office” in Sheikh Jarrah, near the homes of residents facing eviction.

On Sunday evening, Jewish Israelis begin marking “Jerusalem Day,” a national holiday in which Israel celebrates its annexation of east Jerusalem and religious nationalists hold parades and other celebrations in the city. On Monday, an Israeli court is expected to issue a verdict on the planned evictions in Sheikh Jarrah.

Israel captured east Jerusalem, along with the West Bank and Gaza — territories the Palestinians want for their future state — in the 1967 Mideast war.

Israel annexed east Jerusalem in a move not recognized internationally, and views the entire city as its capital. The Palestinians view east Jerusalem — which includes major holy sites for Jews, Christians and Muslims — as their capital, and its fate is one of the most sensitive issues in the conflict.

The Al-Aqsa mosque compound is the third holiest site in Islam. It is also the holiest site for Jews, who refer to it as the Temple Mount because it was the location of the biblical temples. It has long been a flashpoint in the Israeli-Palestinian conflict.

In recent days, protests have grown over Israel’s threatened eviction in Sheikh Jarrah of dozens of Palestinians embroiled in a long legal battle with Israeli settlers trying to acquire property in the neighborhood.

The United States said it was “deeply concerned” about both the violence and the threatened evictions. The so-called Quartet of Mideast peace makers, which includes the U.S., European Union, Russia and United Nations, also expressed concern.

Egypt and Jordan, which made peace with Israel decades ago, condemned Israel’s actions, as did the Gulf countries of Bahrain and the United Arab Emirates, two of the four Arab countries that signed U.S.-brokered normalization agreements with Israel last year. The UAE expressed “strong condemnation” of Israel’s storming of Al-Aqsa.

Israel’s Foreign Ministry had earlier accused the Palestinians of seizing on the threatened evictions, which it described as a “real-estate dispute between private parties,” in order to incite violence.

Hamas, which rules the Gaza Strip and opposes Israel’s existence, has called for a new intifada, or uprising.

In an interview with a Hamas-run TV station, the group’s top leader Ismail Haniyeh warned Israeli Prime Minister Benjamin Netanyahu not to “play with fire” in Jerusalem.

“Neither you, nor your army and police, can win this battle,” he said. 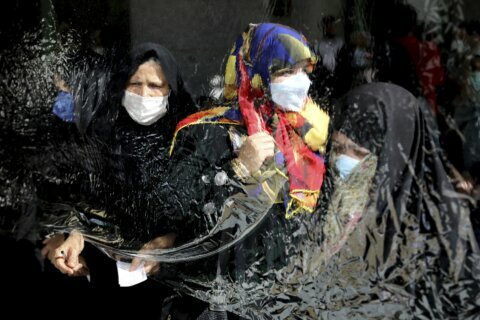