BAGHDAD (AP) — At least four rockets struck an Iraqi airbase Saturday night, the Iraqi military said in a statement, while other officials said one person was wounded at the base where an American defense company services combat aircraft.

Four security officials said that the individual wounded at Balad airbase in Salahaddin province worked for the company, and one of them said his nationality was South African. The officials spoke on condition of anonymity in line with regulations.

They said U.S. defense company Sallyport has its headquarters within the airbase, and currently has 46 personnel there contracted to provide base services to support Iraq’s F-16 program.

The attack comes days after over a dozen rockets targeted coalition forces outside Irbil international airport in the Kurdish-controlled region of northern Iraq. The attack killed one coalition contractor and wounded nine more. Iraqi and Kurdish residents were also severely injured.

Saturday’s attack comes after NATO announced it would dramatically scale up its mission in Iraq from 500 personnel to 4,000, in order to battle the remnants of the Islamic State group, according to comments from Secretary-General Jens Stoltenberg this week. The increase comes as U.S.-led coalition troops have gradually reduced their presence in Iraq over the last year.

NATO’s training mission was launched in 2018 to help the conflict-ravaged country develop new academies and military schools for its armed forces. It was initially located in the capital, Baghdad, and in neighboring Jordan. 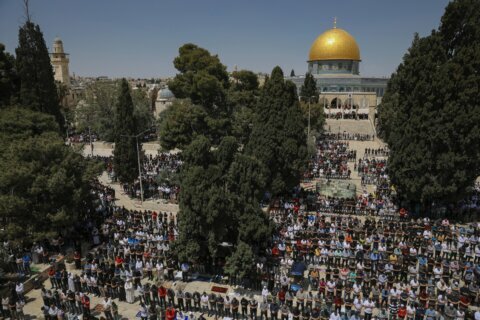 Iran official says Tehran has started enriching uranium up to 60% purity, its highest level ever, after Natanz sabotage