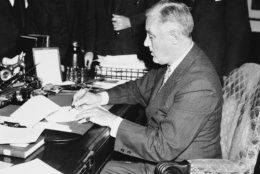 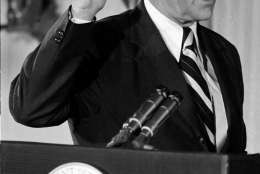 On Sept. 16, 2001, President George W. Bush, speaking on the South Lawn of the White House, said there was “no question” Osama bin Laden and his followers were the prime suspects in the Sept. 11 attacks; Bush pledged the government would “find them, get them running and hunt them down.”

In 1810, Mexico began its revolt against Spanish rule.

In 1910, Bessica Medlar Raiche of Mineola, N.Y., made the first accredited solo airplane flight by a woman in the United States.

In 1940, President Franklin D. Roosevelt signed the Selective Training and Service Act. Samuel T. Rayburn of Texas was elected Speaker of the U.S. House of Representatives.

In 1976, the Episcopal Church, at its General Convention in Minneapolis, formally approved the ordination of women as priests and bishops.

In 1982, the massacre of between 1,200 and 1,400 Palestinian men, women and children at the hands of Israeli-allied Christian Phalange militiamen began in west Beirut’s Sabra and Shatila refugee camps.

In 1987, two dozen countries signed the Montreal Protocol, a treaty designed to save the Earth’s ozone layer by calling on nations to reduce emissions of harmful chemicals by the year 2000.

In 1994, a federal jury in Anchorage, Alaska, ordered Exxon Corp. to pay $5 billion in punitive damages for the 1989 Exxon Valdez (val-DEEZ’) oil spill (the U.S Supreme Court later reduced that amount to $507.5 million). Two astronauts from the space shuttle Discovery went on the first untethered spacewalk in ten years.

In 2005, President George W. Bush ruled out raising taxes to pay the massive costs of Gulf Coast reconstruction in the wake of Hurricane Katrina, saying other government spending had to be cut to pay for the recovery effort.

In 2007, contractors for the U.S. security firm Blackwater USA guarding a U.S. State Department convoy in Baghdad opened fire on civilian vehicles, mistakenly believing they were under attack; 14 Iraqis died. O.J. Simpson was arrested in the alleged armed robbery of sports memorabilia collectors in Las Vegas. (Simpson was later convicted of kidnapping and armed robbery and sentenced to nine to 33 years in prison; he was released in 2017.)

In 2013, Aaron Alexis, a former U.S. Navy reservist, went on a shooting rampage inside the Washington Navy Yard, killing 12 victims before being shot dead by police.

Five years ago: President Barack Obama declared that the Ebola epidemic in West Africa could threaten security around the world and ordered 3,000 U.S. troops to the region in emergency aid muscle. After a day of public pressure from angry fans and concerned sponsors, the Minnesota Vikings reversed course and placed star running back Adrian Peterson on the exempt-commissioner’s permission list while he addressed a felony charge of child abuse in Texas. (The Vikings had initially decided that Peterson could play with the team while the legal process played out; Peterson later pleaded no contest to misdemeanor reckless assault for physically disciplining his 4-year-old son with a wooden switch.)

One year ago: At least 17 people were confirmed dead from Hurricane Florence, and the North Carolina city of Wilmington was cut off by still-rising waters as catastrophic flooding spread across the Carolinas. Some Republican senators considering the Supreme Court nomination of Brett Kavanaugh expressed concern over a woman’s allegation that a drunken Kavanaugh had groped her and tried to take off her clothes at a party when they were teenagers.