Today in History: May 21

Here’s a look at what happened on this date in history.
(1/6) 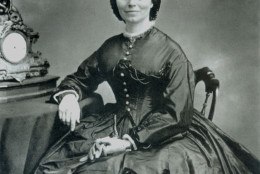 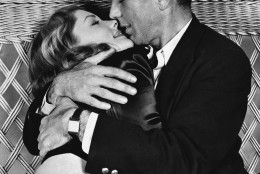 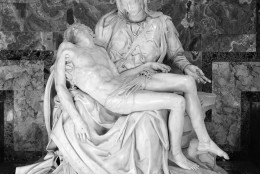 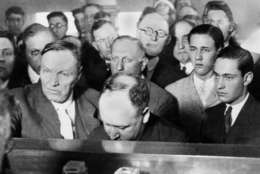 On May 21, 1932, Amelia Earhart became the first woman to fly solo across the Atlantic Ocean as she landed in Northern Ireland, about 15 hours after leaving Newfoundland.

In 1542, Spanish explorer Hernando de Soto died while searching for gold along the Mississippi River.

In 1863, the Seventh-day Adventist Church was officially organized.

In 1868, Ulysses S. Grant was nominated for president by the Republican national convention in Chicago.

In 1924, in a case that drew much notoriety, 14-year-old Bobby Franks was murdered in a “thrill killing” carried out by University of Chicago students Nathan Leopold Jr. and Richard Loeb (Bobby’s cousin).

In 1927, Charles A. Lindbergh landed his Spirit of St. Louis monoplane near Paris, completing the first solo airplane flight across the Atlantic Ocean in 33 1/2 hours.

In 1941, a German U-boat sank the American merchant steamship SS Robin Moor in the South Atlantic after the ship’s passengers and crew were allowed to board lifeboats.

In 1945, actors Humphrey Bogart, 45, and Lauren Bacall, 20, were married at Malabar Farm in Lucas, Ohio (it was his fourth marriage, her first, and would last until Bogart’s death in 1957).

In 1972, Michelangelo’s Pieta, on display at the Vatican, was damaged by a hammer-wielding man who shouted he was Jesus Christ.

In 1979, former San Francisco City Supervisor Dan White was convicted of voluntary manslaughter in the slayings of Mayor George Moscone (mahs-KOH’-nee) and openly gay Supervisor Harvey Milk; outrage over the verdict sparked rioting. (White was sentenced to seven years and eight months in prison; he ended up serving five years and committed suicide in 1985.)

In 1991, former Indian Prime Minister Rajiv Gandhi was assassinated during national elections by a suicide bomber.

In 1998, a teen gunman opened fire inside Thurston High School in Springfield, Oregon, killing two students, a day after he killed his parents. (The shooter was sentenced to nearly 112 years in prison.) In the wake of deadly protests, Indonesian President Suharto stepped down after 32 years in power.

Ten years ago: A day after the Senate voted to keep the Guantanamo prison camp open, President Barack Obama made his case for closing the facility, denouncing what he called “fear-mongering” by political opponents; Obama made his case moments before former Vice President Dick Cheney delivered his own address defending the Bush administration’s creation of the camp. A 66-year-old woman with terminal cancer became the first person to die under Washington state’s new assisted suicide law.

Five years ago: With outrage mounting over veterans’ health care, President Barack Obama declared that misconduct alleged at VA hospitals would not be tolerated. China signed a $400 billion gas deal with Russia, binding Moscow more closely to Beijing amid international sanctions for Russian actions in Ukraine. Wendell Scott became the first African-American driver to be elected to the NASCAR Hall of Fame.

One year ago: Syria’s military captured an enclave in southern Damascus from Islamic State militants after a monthlong battle, bringing the entire capital and its suburbs under full government control for the first time since the civil war began in 2011. A divided Supreme Court ruled that businesses can prohibit their workers from banding together in disputes over pay and conditions in the workplace, finding that individual employees can be forced to use arbitration, not the courts, to air complaints about wages and overtime. Gina Haspel was sworn in as CIA director. Netflix announced a multi-year deal with Barack and Michelle Obama; there were no details announced on what shows they would make. The U.S. Postal Service announced that it would soon issue its first scratch-and-sniff stamps, featuring illustrations of ice pops.