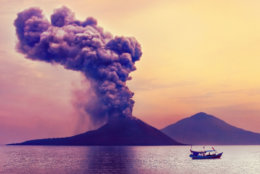 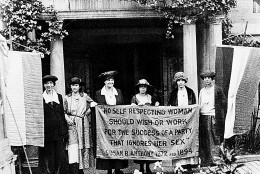 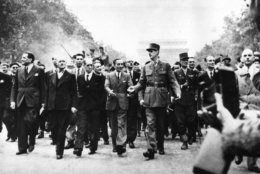 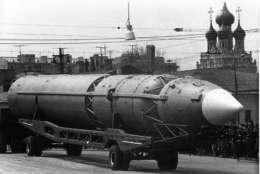 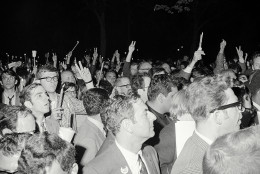 On August 26, 1920, the 19th Amendment to the U.S. Constitution, guaranteeing American women’s right to vote, was certified in effect by Secretary of State Bainbridge Colby.

In 1883, the island volcano Krakatoa began cataclysmic eruptions, leading to a massive explosion the following day.

In 1910, Thomas Edison demonstrated for reporters an improved version of his Kinetophone, a device for showing a movie with synchronized sound.

In 1944, French Gen. Charles de Gaulle braved the threat of German snipers as he led a victory march in Paris, which had just been liberated by the Allies from Nazi occupation.

In 1957, the Soviet Union announced it had successfully tested an intercontinental ballistic missile.

In 1958, Alaskans went to the polls to overwhelmingly vote in favor of statehood.

In 1968, the Democratic National Convention opened in Chicago; the four-day event that resulted in the nomination of Hubert H. Humphrey for president was marked by a bloody police crackdown on antiwar protesters in the streets.

In 1971, New Jersey Gov. William T. Cahill announced that the New York Giants football team had agreed to leave Yankee Stadium for a new sports complex to be built in East Rutherford.

In 1972, the summer Olympics games opened in Munich, West Germany.

In 1974, Charles Lindbergh — the first man to fly solo, non-stop across the Atlantic — died at his home in Hawaii at age 72.

In 1985, 13-year-old AIDS patient Ryan White began “attending” classes at Western Middle School in Kokomo, Indiana, via a telephone hook-up at his home — school officials had barred Ryan from attending classes in person.

In 2015, Alison Parker, a reporter for WDBJ-TV in Roanoke, Virginia, and her cameraman, Adam Ward, were shot to death during a live broadcast by a disgruntled former station employee who fatally shot himself while being pursued by police.

In 2017, Hurricane Harvey spun into Texas, unloading extraordinary amounts of rain. (The hurricane killed nearly 70 people, damaged more than 300,000 structures and caused an estimated $125 billion in damage.) Boxer Floyd Mayweather Jr. beat UFC fighter Conor McGregor in a boxing match in Las Vegas that was stopped by the referee in the 10th round; it was the last fight of Mayweather’s career and earned him an estimated $200 million.

Ten years ago: Authorities in California solved the 18-year-old disappearance of Jaycee Lee Dugard after she appeared at a parole office with her children and the Antioch couple accused of kidnapping her when she was 11. A giant wildfire erupted north of Los Angeles; the blaze went on to destroy more than five dozen homes, kill two firefighters and force thousands of people from their homes. Death claimed crime story author Dominick Dunne, 83, in New York City and Ellie Greenwich, 68, who’d co-written songs like “Chapel of Love,” “Be My Baby” and “Leader of the Pack,” in New York City.

Five years ago: In a speech to the American Legion’s national convention in Charlotte, North Carolina, President Barack Obama defended his administration’s response to Veterans Affairs lapses that had delayed health care for thousands of former service members, but conceded more needed to be done to regain their trust. Burger King announced it would buy Canadian restaurant chain Tim Hortons in an $11 billion deal to create the world’s third largest fast-food chain.

One year ago: A gunman opened fire on fellow gamers at a video game tournament in Jacksonville, Fla., killing two men and wounding 10 others before taking his own life. More than 1,000 mourners gathered for the funeral of Mollie Tibbetts, the 20-year-old Iowa college student whose body had been found in a cornfield; a dairy worker suspected of being in the country illegally was charged in her death. Playwright Neil Simon, whose comedies included “The Odd Couple” and “Barefoot in the Park,” died at the age of 91.